Water Mains/Trunk Mains: A 27-inch trunk main from the Oxton reservoir to the Lambley pumping station via Woodborough has suffered from mining problems on Lingwood Lane.

In recent years further problems have been caused by fractured water mains on Lingwood Lane and Roe Hill. Ten bursts have occurred between 1968 and 2007, mostly along Lingwood Lane, but causing havoc along Main Street and in the Pinfold Close / Crescent area. 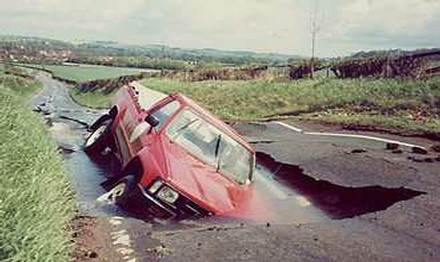 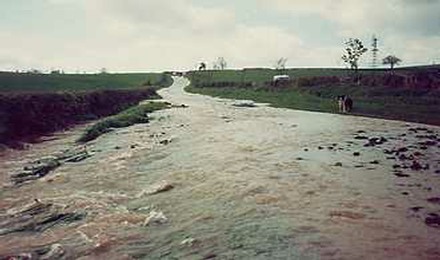 Dramatic photographs of a burst water main on Lingwood Lane in 1986.

A farmer and his wife escaped unhurt from this pick-up truck, which was swallowed up by the road in a Nottinghamshire village. Mr Philip Moss and his wife, Vicky, of Top Wighay Farm, Linby, were driving along Lingwood Lane in Woodborough when they saw a torrent of water gushing towards them.

“We moved over to the opposite side of the road to avoid it”, Phil said, “and suddenly we dropped straight into the hole”.

The hole, caused by burst trunk water main, measured 20 ft long, 6 ft deep and 8 ft wide. “We weren’t hurt or anything”, said Mrs Moss, “but we got out in double quick time”. Phil said his truck was slightly damaged in the incident, which happened just after two o’clock while he and Vicky were delivering horse-feed.

Mr Tony Platt, consumer services engineer for Severn-Trent Water Authority, said the water main itself was in a good condition and the cause of the burst was likely to have been a ground movement of some kind.

Villagers have recently been rocked by earth tremors. Mr T.M. Greenaway, senior engineer for Gedling Borough Council, said: “experience tells us that the road will have to be closed for about a week while it is repaired”.

A major water burst in Woodborough left hundreds of homes without water. Police closed off Lingwood Lane between Woodborough and Lambley after a 27-inch main burst and millions of gallons of water gushed onto the road.

Householders in Lambley, Woodborough, Gedling, Calverton and Carlton were affected. Severn Trent Water workmen battled throughout the morning to repair the pipe and by mid-day supplies to most homes had been restored.