Note: Since writing the foregoing, Mr Edge of Strelley has lent me a pamphlet "Notes to the pedigree of the Strelleys, Oakerthorpe and Hazlebach," by the Rev Charles Kerry, giving the above from Robert de Somerville.

Thoroton does not tell us much about the de Wodeburgs, but is content to record certain facts he has gleaned, and to leave the reader to draw his own conclusions. Ralf and Henry and the Lady Clementia are mere shadows in the distant ages of the past, about whom there can be but little certainty. Piecing together his notes I suggest the following outline of their history, which may at any time be upset by more definite information.

Ralph de Wodeburg, according to an ancient deed, the date of which is not given by Thoroton, married a lady named Emme, who had property at New Ham. They had two sons, Ralf, who succeeded to the Woodborough Manors, and Henry, who inherited his Mother's property at Ham.

Ralf de Wodeburg the second, A.D. 1290, had one daughter, Maud, his heiress, who married John de Cantelupe, and died childless. So at her death the Woodborough Manors passed to her Uncle, Henry de Wodeburg. This RaIf de Wodeburg gave £10 a year to his brother Henry for his life, to be paid to the "Abby of Stratford" he was therefore a liberal supporter of the Church, for £10 a year was a very large sum in those days. He also in 1275 acquired from Sir Walter de Huntercombe some freehold land at West Hammes for one hundred and five marks, which the latter owed him and probably could not pay.

Henry de Wodeburg appears to have married Clementia, daughter and heiress of Sir William de Middyltons of Rosse. I can only suppose that she had previously been married twice. Her first husband was Mathews de Vilers of Kinalton, as is clear from Thoroton's pedigree of de Vilers. But she had another son, William Sampson, of Eperston; so that after the death of her first husband she appears to have married Hugh Sampson, of Eperston, by whom she had a son, William, and a daughter,  Hawisia ¹, who married Robert de Strelley, of Strelley. Again a widow, possessed of goodly lands at Kinalton, Calverton and Eperston, her wealth and charms won for her a third husband, Henry de Wodeburg, the bachelor knight of Woodborough Hall. It was decidedly a "marriage de convenance," uniting the large estates of the de Vilers, Sampsons and de Wodeburgs, an important matter in those perilous times. She bore no child to her third husband, Henry de Wodeburg, who in A.D. 1316 gave all his freehold land, goods and chattels to Sir William de Craye and Margery de Nowers, his wife and their heirs, which apparently after the deaths of the said William and Margery de Nowers, without heirs, came back to Paganus de Vilers, son of the Lady Clementia, by her first husband, Matheus de Vilers. Thus, the family of De Wodeburg was extinct.

1: According to Mr Kerry this is wrong, for he says that Robert de Strelley married Hebicabell, heiress of Shipley.

Paganus de Vilers, Knight of Kinalton, A.D. 1338, son of the Lady Clementia by her first husband, claimed Woodborough Hall on the death of his Mother by right of inheritance. Thoroton says he was "a great man and had many sons" and gives a long account of him under "Calverton," and tells how he distributed his estates among his sons; Calverton to Alan, Newbold to William, Uvethorp to Thomas, Hole and other land in Calverton to Robert. Kinalton passed to the Foljambe family, probably, as Thoroton suggests, by the marriage of Godefridus Foljambe to Avena de Vilers. He passed Woodborough to Richard de Strelley, A.D. 1336. But this statement of Thoroton does not agree with that of Mr. Kerry, who says, p. 3:-"Avicia, wife of Sewall le Foune, by whom he had one daughter, Lucia, who became the wife of Sampson de Strelley, founder of the Woodborough branch of the Strelleys, who differenced the arms of the Strelleys— 'paly of six argent and azure' —by placing a cinquefoil gules in the centre of the shield"; and "June 29th, 1330, he (Robert de Strelley) and his uncle Sampson, of Woodborough, were witnesses to a deed between the Corporation of Nottingham and Sir Will de Colwick."

Richard de Strelley was the son of Sampson Strelley, who was the second son of Robert de Strelley. He built the present Chancel of Woodborough Church, as is proved by the Decorated Style of Architecture, of which it is a perfect specimen. This is confirmed by Thoroton's note under "Strelley." "Sampson de Strelley, 1350, had license that he and the rest of the Parishioners in that Village might hear sermons for the space of a year in the Chapel situate within his Manor of the said Village, because the Parish Church was not then fully built." ¹Thus father and son at the same time were building Churches at Strelley and Woodborough. He was Knight of the Shire, and represented the County in Parliament from 1331 to 1336. He had three children; William, who died before him, leaving a son Robert, who died childless; Elena, who married Ivo Jeke of Prestwold; and Thomas, who succeeded him.

1: The present Church at Strelley appears to be a cruciform Church of the Perpendicular period, ie. if the present tracery has been accurately reproduced in Restoration, which I doubt. Moreover, Rev C. Kerry says the unnamed monument in the Chancel of Strelley Church is about 1405-10, which implies that the Church is really older than it appears to be.

Richard de Strelley in 1571 married Isabel Samon and died childless: the property therefore passed to his brother, Christopher Strelley, who was a freeholder in Calverton in 1612. Dickinson, (p. 159) ¹, says he married Frances, daughter of Fulc Cartwright of Ossington. "Leaving no issue he settled his estates at Woodbrough and elsewhere on his sister Isabel Bold, 13 Eliz, whose grandson, Strelley Bold, sold them to George Lacock." But according to the Parish Register Christopher Strelley married a second wife, Marie Wigley, in 1606, and had a son William Strelley of Arnold, who could not inherit because of the settlement in favour of John Bold. Christopher Strelley died in 1622.

John Bold was succeeded by his son Strelley Bold, and Strelley Bold sold Woodborough Hall to Mr. George Lacock. Thus the Manor of Woodborough Hall having for 600 years been the property of the de Wodeburg's and de Strelley's passed into other hands. It seems probable that the family had been ruined by the Civil Wars, as I shall show later on.

The whole of Woodborough, however, was not acquired by the de Wodeburgs. Parts of the Manors of the Eperston Theyns Uluric, Elsi and Uluiet extended into Woodborough, and were acquired by Ralf de Limesin and Roger de Busli. This Ralph de Limesin founded the priory of Hertford ¹ and gave to it tithes of all his land in Eperston and Woodborough ². It was a cell of St. Alban's Abbey and had a prior and 12 monks. It was dissolved in 26 Henry VIII and came to the crown and the King gave it to Anthony Denny and Joan Champernon.
"Rex concessit Anthonio Denny et Johannæ Champernon ... omnia, annuitates portiones, decimas... in Lowgham, Wodeborowth et Eperston in Com Nott."  His property, by failure of issue, passed A.D. 1239 to a younger son, Hugo de Odingsel, but really the Sampsons who held under Ralf de Limesin and Roger de Busli were the great people of Eperston and holders of land in Woodborough as well.

1: This is probably the origin of the name of the Hertford Manor.
2: Dugdale's Monasticon.

Other owners were Simon de Cruce, who held a Manor in 1309; William de Rempston in 1401, Roger de Houton ¹, who purchased the advowson of Houton Church in 1528 by giving various lands to the Prior of Thurgarton, including half a bovate in Woodborough, and Ralf de Bellasago, who in 1261 "gave to God and the Canons of S. Peter of Thurgarton the Church of Lowdham and all his land in Woodborough."

The Strelleys of Strelley and Woodborough must have been a great family in the middle ages, but at the present time they have altogether disappeared from both places. At Strelley there are some beautiful monuments of the Strelleys in the Chancel of a fine cruciform Church, and in Strelley Hall there is one room (the study), having walls of immense thickness and a vaulted roof, and some cellars, which are said to be the only remains of the original house. The Strelleys of Strelley lost their importance when the two sons of John and Sancia Strelley died young and the vast estates devolved upon the four remaining daughters, Isabel, wife of Clement Lowe; Margaret, wife of John Powtrell, of Hallam; Elizabeth, wife of William Ayscough; and Ann, wife of Sir Richard Stanhope, of Rampton; and Strelley, with Bilborough, alone went to Sir Nicholas Strelley (who died in 1560), the younger brother of John Strelley. In the time of Civil wars the Strelleys of Strelley seem to have been greatly impoverished, for a Solicitor of Nottingham named Edge held one-third of a mortgage on the property, which had got into a very dilapidated state. This Mr. Edge seems to have bought out the other two-thirds of the mortgage and then to have foreclosed about 1670, and the Edge family has owned Strelley ever since.

At Woodborough there is no memorial of the Strelleys of any kind except the arms in the Chancel Gable and a few entries in the parish register, nor is there any relic of the original house except a bit of wall in the wine cellar. They do not appear ever to have been of much importance. They also appear to have got into difficulties during the Civil wars, for their Woodborough property soon after the Restoration was acquired by another Nottingham solicitor named George Laycock, who probably had a mortgage upon it. It is probable that both branches of the family were Cavaliers, and were ruined in the Royal cause. Mr. R. C. Strelley of Oakerthorpe, near Alfreton, is the present representative of the family, and other descendants in humble circumstances still live in the country.

Wills mentioned in the Torre M S S at York

"Tho de Strelley of Wodeburgh made his will proved ultimo Mar. 1400, giving his soul to God Alm: S. Mary and all Saints and his body to be buried in the Church of St. Swythun of Wodeburg."

6 July 1491. John Perrot of Wodeburg made his will proved 17 May 1492, giving his soul to God Alm: S. Mary and All Saints, and his body to be buried in the N. side of ye Ch of Wodburg. His tombstone now lies by the South pillar of the Chancel Arch, but is much broken and worn. Besides the date one can read 'Ora pro nobis, Johnes Perot.'

"13 Nov. 1558. Henry Shirley of Woodborowe in Com Notts Esqre made his will (proved 28 Sep. 1568), giving his soul to God Alm: his Creator and Redeemer, and to all saints, and his body to be buried in the close of S. Swithin's in Wodborowe upon the S. side of ye Chancell."

"13 Aug. 1662. Xtpher Strelley of Notts, late of Wodeburgh, Esqre, made his will (proved 21 March 1521), giving his soul to God Alm: his Creator and to Jesus Christ his Redeemer, and his body to be buried in the Chancell of St. Swithin’s of Wodborough."

Extracts from the Woodborough Registers.

1603. Strelley, the son of John Bold was baptized the xx day of Januarie.

1615. Henry Bould, the son of John Bould, gentleman, was baptized.

1637. Frances, the daughter of William Strelley, gent. by Frances his wife, was baptised.

1638. Anne, the daughter of William Strelley, gent. Frances his wife, was baptized Aug. 18.

1606. Mr. Christopher Strelley and Mrs. Marie Wigley were married by license the first day of April. 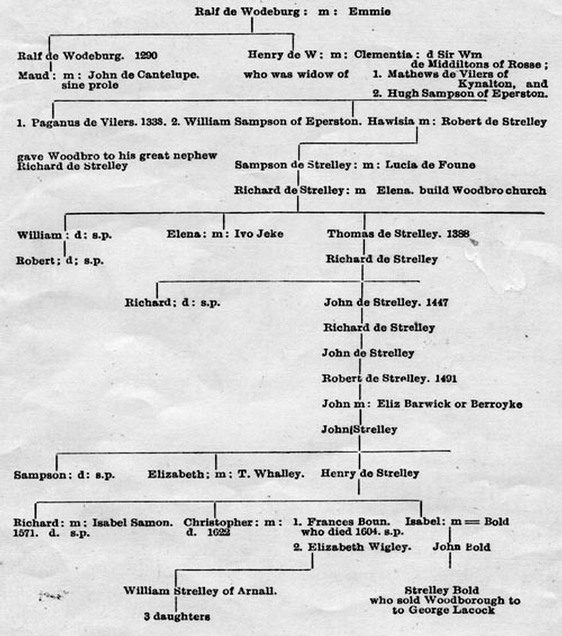 PEDIGREE OF THE LORDS OF WOODBOROUGH