The Old Manor was formally known as the Nether Hall, one of three manors in the village at the time of the Domesday survey, the other two being the Upper Hall and the Middle Hall. It was a Prebendal manor under the jurisdiction of Southwell Minster and was considered to be among the earliest ten Prebends instituted either about the time of the Norman Conquest in 1066, or shortly afterwards. The Rev. Buckland, in his 1896 History of Woodborough gives a very good but incomplete list of thirty Prebends dating from 1220 AD until their suppression in 1841. The 1922 OS map below shows the position of the house (small block) and the farm buildings (large block) and the orientation to Lowdham Lane where the bailiff’s cottage was built. This is the eastern entrance to Woodborough.

The Woodborough Manor estate was leased by the Prebend for a period of three named lives but the tenant could extend the lease by paying a sum of money when one of the three lives died in order to add on an extra life to the lease. The Prebends were often pluralists in that they held livings in villages, often in other areas, at the same time as they held their Prebendary Manor. Many Prebends rarely visited their estate or village, paying a vicar or curate to ostensibly carry out their parochial work, and a vicar choral for their duties at the Minster. A new Woodborough Prebend, when taking over the Manor from his predecessor would invariably demand of the sitting leaseholder a Terrier, which was a list of buildings, fields and woods belonging to the Manor and, prior to the Woodborough Enclosure Award, all strips of  and were held in the Open Fields. One early Terrier includes two pieces of waste ground in the village, Foxwood and Grimesmoor, which by 1795 were considered to be Commons.

Leases stated that the tenant could use certain timber for the repair of the house, farm buildings and implements but occasionally had to provide a list of all oak, ash and elm trees on the estate. There were a number of leases involving the Foster family from 1546 to 1751, and two of their inventories dated 1669 and 1695 suggested that the house was of two storeys, and could have been thatched. Even then it was a substantial dwelling as in a lease of 1666 it was referred to as the Mansion.

A sale poster of 1879 describes the house as having attics, that suggests the walls were raised in height, probably at a time if thatched, when the thatch needed renewing and was then replaced with tiles. Dormer windows in photographs of about 1900 showed the attics. Below left, an aerial photograph of Old Manor Farm, barns and crew yard in 1949.

There was a dovecote in one of the farm buildings and a fishpond, both to provide fresh food during the winter months. After the suppression and the death of the Woodborough Prebend in 1862 the Manor was sold. There are various documents listing some of the tenants and farm bailiffs between 1760, when Robert Foster died and 1841. After that time the occupants of the farmhouse are listed in the censuses from 1841 to 1901 but during this period the names of the actual owners are unclear until 1883 when it was purchased by Nottingham solicitor, Roby Liddington Thorpe who was described as a 'gent of Nottingham'.

Although Mr Thorpe does not appear to have lived at the Old Manor, his name is still connected with Thorpe's Cottages, a group of houses at the east end of the village which he purchased also in 1883 and a bridleway known as Thorpe's Road which was the original from Woodborough to Lambley before the new Lingwood Lane was made at the time of the Enclosure Award. The photograph above left is of Nether Hall in 1910 taken from Lowdham Lane. Roby Liddington Thorpe died in 1900 and his brother Henry Roby Thorpe inherited the estate. He was a bachelor, and on his death in 1903, the estate went to Roby Liddington Thorpe's daughter, Mrs Dorothea Mary Roby Benson. Her husband Mr Godfrey Rathbone Benson, whom she had married in 1887, was raised to the Peerage in 1911 and took the title Lord Charnwood. His wife, now Lady Charnwood, died in 1942 and her son, The Hon. John Roby Thorpe Benson, seems to have taken over the running of the estate as he sold a price of land on Lowdham Lane in 1938 to Basford Rural District Council, on which the first twelve Woodborough council houses were built in 1939, six of which were to be for agricultural workers.

A short distance from the Manor and by Lowdham Lane a bailiff's cottage was built in 1892. It appears that very soon after it was completed the occupants, according to White's Directory of 1894, were Mr Frederick Henry, a tea merchant, and his wife Phoebe, they were both listed, he as a farmer living at 'Nether House'. By the 1901 census only Mrs Phoebe Henry, a widow aged 31 [51] is recorded and shown to be present and as 'living on her own means'.

Following Mrs Henry into the bailiff's cottage [year unknown], a water-colour artist and black and white illustrator named Mr Stacey Blake [William Francis Stacey Blake] lived there with his wife until about 1914. He was a leading member of the Nottingham Society of Artists and had painted extensively in Europe and North Africa.

His works had been accepted by the Royal Academy and art galleries in Liverpool, Leicester, Northampton, Derby and Nottingham, some picturing Nottingham and Woodborough scenes. Before Mr Blake left the village Mr Baggaley, a farmer from Long Bennington walked all his stock and farming equipment the eighteen miles from Long Bennington to Woodborough, crossing the River Trent by the old toll bridge at Gunthorpe in 1912. The Baggaley family lived for a time in the bailiffs’ cottage until Mr Blake vacated the Old Manor. They continued to farm the Old Manor estate until 1957 when it was auctioned and purchased by Mr Elkington. The Elkingtons moved into the Old Manor house in 1958, but by 1964 had built a new home on farmland close by and the Old Manor was demolished in 1965. Soon after the demolition the site was cleared for building work to commence for a small development of new houses and the area became officially know as Old Manor Close. 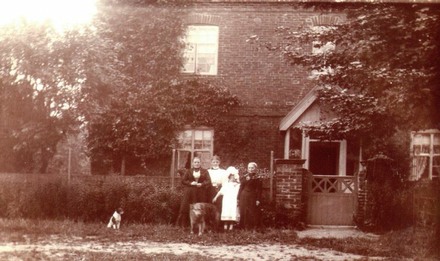 Visitors outside Nether Hall in 1903. 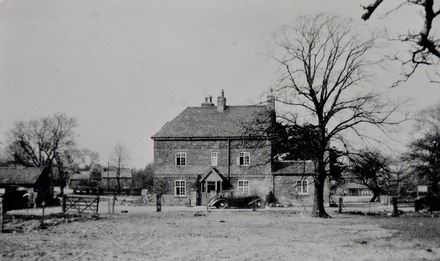 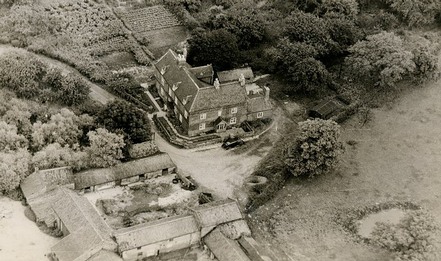 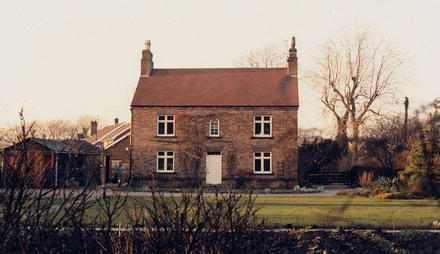 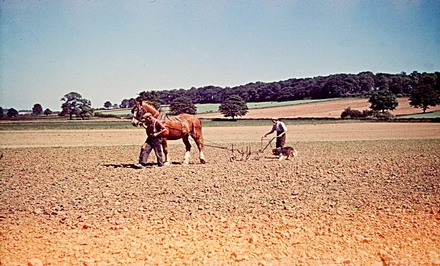 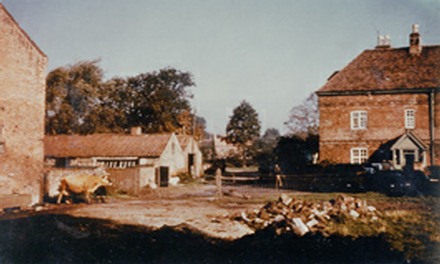 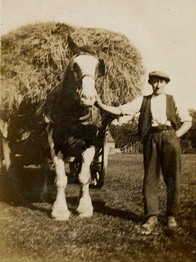 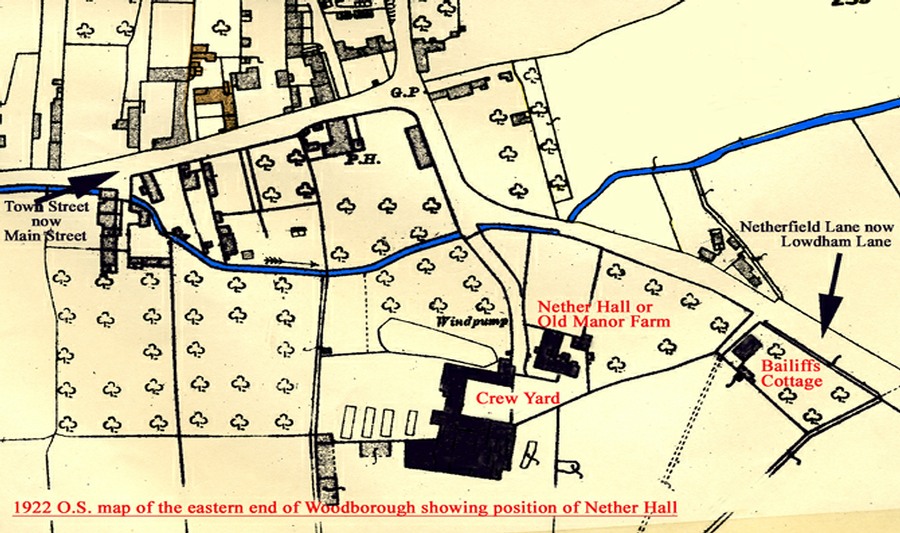 The former Bailiff’s Cottage in 1990.

Above Right: The farmhouse, crew yard and cow sheds in 1959.