Although Joseph Marriott, pictured left date unknown, was a framesmith aged 27 when his name appears on the 1861 census as having been born in Woodborough, in about 1834, he does not appear on earlier censuses.

As a working framesmith, living next to the 1827 Wesleyan chapel on the north side he would repair faults on hand-knitting frames and would overhaul the machines when necessary, usually about every ten years. His workshop was to the rear of the house, where later Cynthia's father, Bob Hallam, had his blacksmith's shop. He also had a frame-shop immediately to the rear of the chapel.

By the 1871 census he was classed as a framesmith/grocer, but by 1881, whilst he was a framesmith, his wife Harriet was the shopkeeper. By 1891 Joseph, aged 57, was a widower and framesmith/grocer and two of his daughters, Harriet aged 21 and Harriet's younger sister Elizabeth, aged 16, were the shop assistants.

In the 1901 census, Joseph now 67 had retired as a framesmith and daughter Harriet, known in the village by her contemporaries, as Hettie, was running the shop and continued to do so for many years. 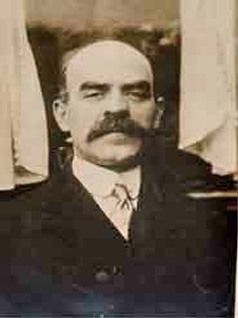 The area of Roe Hill was served by Hettie's shop, the west end of the village by Johnnie Ball's shop and the east end by Mr & Mrs Bruce's shop whilst the Co-op, now the newsagents, drew custom from the whole village.

Joseph Marriott was also a local Primitive Methodist preacher and would walk the 15 miles to Ollerton to preach on the Sunday, starting out at 5 a.m. and would return the following day. In 1860 he was a Trustee of the Primitive Methodist chapel and one of the Management Committee in the following year. He was Chapel Steward in 1864 and 1867. In 1889 he was one of 13 Trustees, twelve of whom were framework knitters, the thirteenth being an agricultural labourer.

In 1892 Joseph Marriott published a brief history of Woodborough, a small leaflet, 12 sides in total entitled 'A Lecture of the History of Woodborough', with some accounts of the principal inhabitants, Church and Schools. He starts off with the state of the village as recorded in the Domesday Book, through the times of the de Wodeburgs, the Strelleys and the Lacocks. With reference to the Middle Manor he mentions the Wood family, Mr Edge, Mr J B Taylor and Robert Howett. 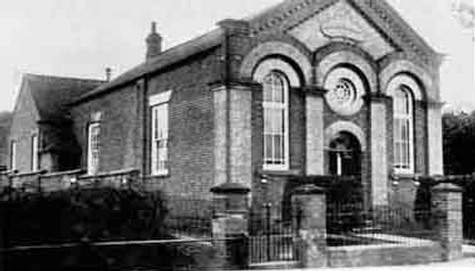 Marriott then gives a history of the Church and describes it quite accurately but says the Norman church was probably pulled down when the present chancel was built by the Strelley family about 1360. He gives a full description of the bells and their inscriptions. Leaving the church he writes about the first school, the Oldacres family and remarks that he received his early education from the Rev’d. Samuel Lealand Oldacres, whom he praises for his sympathy with children and his toleration of the opinions of others.

This photograph of The Primitive Methodist Chapel also known as the West End Chapel, was taken for its centenary in 1951. The building was opened in 1851 and closed in 1962 when the Primitives merged with the Woodborough Methodists.

The new 1878 school is mentioned, together with the fact that of the six governors there were two representative governors elected by the ratepayers, Mansfield Parkyns being one and Marriott himself being the other. Although Marriott was himself a Methodist preacher, the Non-conformists had been against the school, wanting a Board or National School and had started their own school in protest.

His history ends with the induction of the Rev’d Buckland as vicar saying 'May his appointment among us be honoured, happy and prosperous'.