The Chairman of Woodborough Parish Council, Cllr. John Harlow, summarized the history of flooding in Woodborough. There were two causes of flooding, firstly, run-off from the land when the ground is saturated which results in exceptionally large volumes of water and secondly, the poor maintenance of the dyke and associated culverts that are silted up and cannot cope with the volume of water. Roadside gullies are only emptied once a year, which is not enough. The solution seemed to be two-fold: improved maintenance and one or two lagoons as previously suggested by Gedling Borough Council. Local Member of Parliament, Paddy Tipping, said the Government had promised that nobody should be denied insurance and asked for anyone experiencing such a problem to contact him direct. 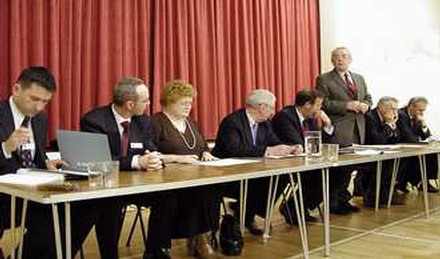 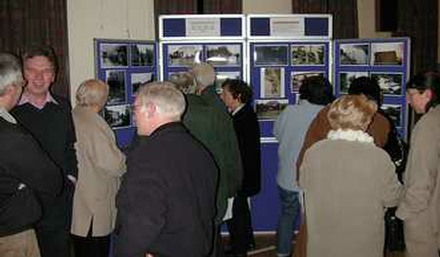 Response by Environment Agency: A representative of the Environment Agency (EA) reminded the meeting that the EA website had a section devoted to advising those potentially at risk from flooding on measures and precautions which individuals could take to minimize the risk and reminded the meeting that it was the individual’s responsibility to protect their own homes.

The EA was not responsible for all drainage issues; Severn Trent had responsibility for sewage and the Highway Agency for surface water on roads. It was expected that the EA would take responsibility for the dyke in April 2005, because of an objection from the Newark Internal Drainage Board this was postponed until April 2006.

Flood defence is now organized nationally and currently there is a block grant of £4M. However, all schemes had to pass a rigorous risk analysis and every pound spent had to “save” a pound at least. A points system had been developed with a possible range of 1 to 42 points, only schemes with a score greater than twenty could be expected to go ahead. As an example, the £6M West Bridgford scheme was cited where the score was one of the highest in England with 35 points and a cost benefit analysis of 3:1 and protecting 8000 properties. It was agreed that the system does tend to favour densely populated urban areas.

Response by Paddy Tipping MP: Paddy Tipping MP, responded by saying there had been a 50% increase in funding over the last 2-3 years and the Government did recognize the importance of flood prevention schemes. It was true that the EA had to prioritise schemes but he did think the assessment formula would be revised in the medium term as the Government had recognized rural communities miss out on funding.

The EA representative then asked for information saying that the Agency did not have adequate historical information on flooding in Woodborough and asked anyone with information, records or photographs, especially those showing the maximum height of flood to contact the Agency so the appropriate documents could be copied. He further outlined the transfer process whereby the EA would assume responsibility from Gedling BC and other agencies. 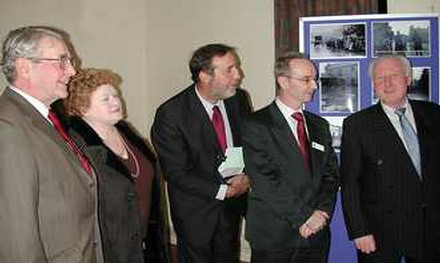 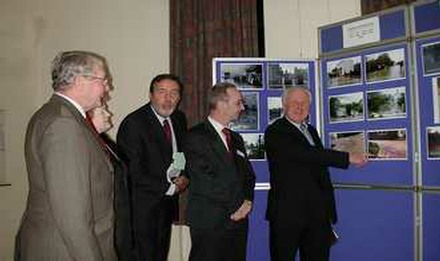 Left and right: Members of the panel looking at a display of photographs of past village

flooding prepared for the event by the Woodborough Photographic Recording Group.

Action: The meeting was told that the EA would: inspect the watercourses and prepare a plan, in 2006 undertake maintenance of the channels and make a bid for a share of the £2.9M available in this area for small rural scheme bearing in mind the number and value of property at risk. He also recommended that the village produces an Emergency Flood Plan in conjunction with Gedling Borough Council.

The Agency representative further explained the reasoning behind the flood maps available on the internet but emphasized these had been produced quickly and were constantly being reviewed. Over the next few years these will be revised and improved as digital terrain models become available and the watercourses were surveyed, leading to depth feasibility and alleviation schemes.