“Though I am a non-Conformist, and we have held many convictions for more than 40 years, there are some things about the Church which I admire: the reverence of her worship, the beauty of her architecture and music, the sublimity of her Liturgy, the reading of the Scriptures in regular order, her antiquity and continuity. She has survived everything else. The Strelleys, Lacocks, Bainbridges and others are gone, but the Church remains. More than 50 Kings and Queens and about 30 generations of human beings have risen into life, and sunk back again into death, but the old Church remains.”

These words were spoken just over 60 years ago by Mr Joseph Marriott, when Woodborough Church was being restored in the time of the Rev’d W E Buckland. The latter in his History gives 1356 as the probable date of the completion of the Chancel. On this authority we propose to observe the 600th Anniversary next year.

“She has survived everything else” says Mr Marriott, "and we are fortunate in having such a beautiful Church as a village heritage. Some kind of beautification to commemorate this 6th Centenary is obviously called for". Various things have been suggested. Amongst them are features, which visitors from time to time comment on, and that is the uncarved blocks of stone at the base of the mouldings on the aisle arches. We shall never know whether they are originals left uncarved for lack of money or replacements due to vandalism in the time of Cromwell, or they could relate to the lack of skilled workmen after the Black Death. They certainly give the Church an odd and unfinished appearance. It is suggested that 4 out of the 6 might be carved: a reputable craftsman is available; the price £25 a block. The Church Council would like expressions of opinion from members of the congregation before their next meeting on July 5th 1955. 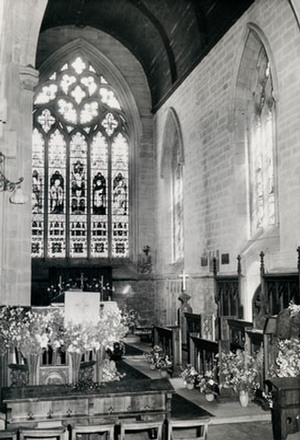 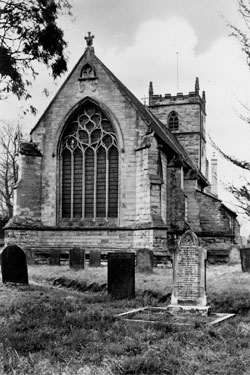 Exterior and interior photographs of the East window taken for the 600th anniversary of St Swithun’s.

Former schoolboy and resident of Woodborough, Mr Norman Binch, and at that time living in the Isle of Wight, undertook the commission which he completed in time for a dedication service on Whit Sunday in 1959. The carving was under the direction of Mary Jenks, A.R.B.S., and be largely done by a recently qualified student, Norman Binch, of Nottingham University.

The new statues, St Paulinus on the left, is positioned on the north side of the East window, and St Swithun on the right, is positioned on the south side. They are resplendent in the same position as those of the originals. Norman was not able to attend the unveiling because of National Service. He has done exceptionally well.

After taking a National Diploma in Design, Modelling and Sculpture, he has gained an Art Teacher’s Diploma at Leicester College of Art. From various pieces of pottery and other works in bronze, plaster, wood and other media, which he has brought home, show that his art is as good as his cricket!

A 600th Anniversary in 1956 should be a great occasion; carrying with it some practical form of thanksgiving that we may hand on improved the beautiful house of worship which we have inherited. Can we raise the £100?

To commemorate this, the Church Council has obtained a Faculty to carve the stone blocks at the base of the mouldings on the aisle arches with the figures of S. Francis and S. George. As a memorial to her late husband, replacement statues were commissioned in 1958 by Mrs Rowan-Robinson, widow of the Rev’d R C Rowan-Robinson, who was vicar of Woodborough for 14 years from 1933 to 1947.