Was this one of the worst snowstorms ever - 7th December 1990

Nationally, the winter of 1990-91, will always be remembered for the great December snowstorm and the February freeze. High pressure was sitting over the UK and began to move to the west as a cold front moved down from the north-west.

By the 7th of December, the cold front was across central parts of the UK but it began to develop a wave feature on the front. At the same time, cold Arctic air was moving behind the cold front from the north. A closed circulation developed and pressure fell by 40mbs in 36 hours reaching 987mb by the 8th and was centered over the south-east of England. Heavy precipitation fell over the Midlands and the Pennines, this fell as snow over the highest parts but at low levels, it was initially rain. With Arctic air moving along the western flank, the rain rapidly turned into snow and since temperatures were fractionally above freezing the snow was wet. The rate of snowfall was high about 6cm an hour and as result many areas were snow covered within half an hour of the snow starting to fall.

The rate of pressure fall caused the winds to increase and across the Midlands, the winds reached gale force causing blizzard conditions and drifting snow. Transport was severely disrupted and many people were trapped in their cars on the M5 and M6 motorways as well as numerous ‘A’ roads in the Midlands. The National Exhibition Centre in Birmingham was used as a haven for rescued drivers. Many parts of the Midlands reported at least 20cm of level snow and there were depths of 60cm in the Derby area and there were drifts of up to 3.7m. In the centre of Birmingham itself depths were approaching 30cm.

The economic impact of the snowstorm was huge. The Saturday takings for stores and shops were well down compounded by the fact that it was three weeks to Christmas. An estimate of 650,000 people were without electricity and about 1.2 million were without water. All rail services in the Midlands were cancelled. Within 4 days most of the snow had gone. The weather became increasingly unsettled in the run up to Christmas. Christmas Day 1990 was a very stormy day for much of the UK. A very deep depression was to the north of the UK with a central pressure of 955mb. An active front passed through the UK bringing heavy rain and violent squalls, indeed, there were tornadoes reported in the West Country. Wind speeds gusted up to 80mph causing structural damage to buildings and bringing down power lines blacking out around 100,000 homes in the south and west of England. There was flooding due to the heavy rain, the run up to Christmas had been wet and windy.

Locally the snowstorm of Friday night 7th December 1990 caused more damage than any of the gales of the last few years. The whole of Woodborough was without power from 8.45 a.m. on Saturday 8th December to 2.15 p.m. on Monday 10th December; the lower part of Lowdham Lane did not get their power back until Wednesday, and Bank Hill and some of the outlying houses and farms suffered for more than a week.

Snowing heavily with strong north east wind for most of the morning. Snow building up on the telephone and power lines and the weight of the snow brought down the wooden poles over a wide area, as were the phones lines, minimum temperature -3oc.

Right: Trees in the churchyard broken by the heavy snow and strong winds

Woodborough featured on BBC TV Midlands News on Monday evening, concentrating on the sheltered housing on Roe Hill and the Four Bells. The churchyard was a sad sight, with several of the mature red may trees split and losing major branches, and the cypresses trees opposite the old Post Office also suffered badly. The Hall grounds also lost several trees and branches were broken off trees all over the village.

Some outlying sheep flocks were stranded near Ploughman Wood and were brought home with difficulty to lower ground and fed with hay. Deep snow drifts closed the road on Bank Hill.

British Telecom was not as quick as the Electricity Board to get their repair men on the job, some subscribers even on Main Street were without telephones for more than a fortnight.

Another casualty of the storm was the annual Christmas party for the over 60’s run by the Community Association which was scheduled to be held on 8th December. With no power and 8 inches of snow underfoot it was obviously impossible to try to stage the event. 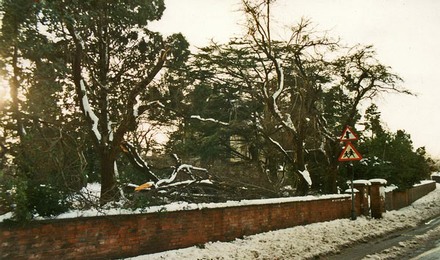