Including Mr Charles Littlewood (Tommy) Hill:  Mr Hill was a Chairman of Woodborough Parish Council and sold a valuable estate at the time of his leaving Woodborough in 1922. Charles Hose Hill was born at Nottingham in 1852; son of Thomas Hill; was educated at Denmark Hill Grammar School, Camberwell, South London, and privately. He married Effie Marian Littlewood in 1893. They had one son, Charles Littlewood and one daughter, Corona Faith Littlewood.

It appears that many of Mr Hill's sitting tenants purchased their properties. It is said that he gave sitting tenants priority if they could raise enough money or obtain a mortgage. Mr Hill had evidently been an enthusiastic supporter of the Woodborough Nursing Association, which without his generous help, might have collapsed. It seemed to have provided the village with its own nurse and it is said that 'if there was ever an angel walked this earth, it was Nurse Clayton'.

According to the tribute to him, Mr Hill was responsible for opening up the corner at the junction of Main Street, Nottingham Road and Calverton Lane; and also the corner by the Nag's Head Public House, where Main Street divides into Lowdham Lane and Shelt Hill.

As a school governor Mr Hill gave the schoolchildren an almost annual party in the Hall grounds and these were noted in the school log book from 1898 to 1913. He may have continued these until he left the village but they are not recorded. Headmaster Mr Biggs noted that in 1903 not only was there a tea but sports for the children with valuable prizes given.

In 1919 he installed the first piped water system to some of his properties in the village. A reservoir was built on high ground in the top corner of the Bracken Field near to Stanley Wood, fed by a wind pump lower down the field. The height of the reservoir above the village enabled it to supply the Hall, Bank Hill Farm, two gardener's cottages in the Hall grounds, the Middle Manor and a group of cottages just to the west of the Middle Manor. This must have been a blessing for the occupants of these properties as others had to obtain their water from a well or yard pump, often communally until piped water came in about 1933.

By retaining the ownership of the Institute and letting it out - (it was being let to Mansfield Foster in 1950), Charles Littlewood Hill who conveyed it to Trustees in a Conveyance and Deed of Grant dated 30th December 1950 was the son of Mr Hill's and in the conditions imposed was carrying out Mr Charles Hose Hill's wishes. In the Conveyance and Deed of Grant Mr C.L. Hill of 7 Newcastle Drive, The Park, Nottingham, gave the Institute on Trust to Arthur Percy Carnell, motor engineer, Joseph Cook, market gardener, Albert Bailey, market gardener and John Mansfield Foster, farmer, subject to certain conditions. These included stipulations that 'for the property shall be used for the purposes of physical and mental training and recreation, and social, moral and intellectual development through the medium of a reading and recreation room. Lectures, classes, games, whist drives, youth clubs recreations and provision to be particularly made for the entertainment and use of the Institute by the old folk of the Parish of Woodborough and used generally for the benefit of the inhabitants of Woodborough. Control of the Institute to be entirely non-sectarian. No political speeches of any kind'. 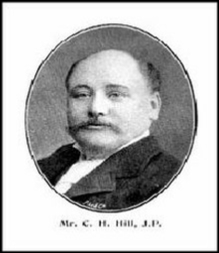 Mr Hill, a company director, purchased Woodborough Hall and 53 acres by private contract, according to the Rev’d. Buckland who was vicar at the time in 1895. Mr Hill enlarged his holdings in Woodborough by purchasing the Home or Hall Farm shortly afterwards and the Middle Manor in 1915.

There is an excellent appreciation of Mr Hill taken from the Trader and Citizen of 2nd September 1922 when he entertained the past and present members of the Parish Council in the Institute, then known as the Parish Room.

Mr Hill had been elected Chairman of the Parish Council in April 1901 and continued to hold that office for 21 years out of the 27 that he lived in the village. The photograph on the left was taken circa 1900 when he would have been about 48 years.

Looking at the names of the members of the Parish Council who attended, Mr Hill would certainly have had to have the patience of Job and the wisdom of Solomon to steer them through their deliberations.

He was praised for his impartiality and the Council had all met as friends under his Chairmanship. Tribute was paid to him for transforming so many of the properties he owned in the village, many of which had been practically derelict, into comfortable dwellings whilst allowing the tenants to remain in them at a merely nominal rent.

When he left the village in 1922 the Sale Catalogue shows the extent of his properties with five farms i.e. the Manor, Home Farm, Wood Barn Farm, Bank Hill Farm and Moor Farm. Also at least 43 cottages plus the butchers, the blacksmiths, Leafe's small farm, now known as Cottage Farm, and the smallholding opposite the present Old Vicarage. The Institute was not in the sale. He had also rebuilt the blacksmiths shop and erected the paint shop at the top of Old Forge Yard used later by Mr Nurcombe as a joiner's shop in about 1920.

Mr Charles Littlewood Hill, Tommy as he was known, was brought up at Woodborough Hall and was educated at Radley College, Oxford where he took part in rowing. He fought in the First World War and was Mentioned in Dispatches. Photo left, dated 1914, shows Tommy in uniform with his sister Corona Faith Hill and father Charles Hose Hill.

Tommy worked briefly for his uncle’s firm, Thomas A Hill of Newdigate Street in Nottingham. Subsequently he was for much of his life abroad, in Argentina and elsewhere. His marriage to Eve Meyer didn’t last long, they had a daughter Mary Pauline.

Tommy retired to Norfolk, where he died in 1978. He had inherited his father’s collection of the contents of Woodborough Hall, and he had these at his home at Little Plumstead, near Norwich. In his will Tommy left everything to be sold and the proceeds added to a trust. The sale from his house was a noted Country House Sale and was handled by Neales of Nottingham. This was followed by a further two sales in Nottingham of specialist silver and porcelain items. 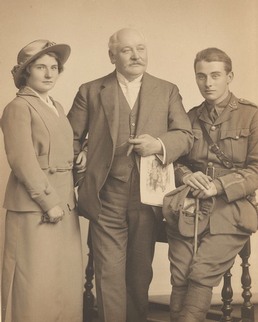 The trust is now named the Charles Littlewood Hill Trust and is administered from Nottingham. It distributes a considerable amount from income each year to community projects in Nottinghamshire and Norfolk. Charles L Hill was, by his will, a benefactor of Nottinghamshire. The Hill legacy lives on through the Trust.

by Peter Saunders to the Woodborough Local History Group.