Whilst the Woodborough Community Association was not entirely responsible for the celebrations in the village for the Queen’s Silver Jubilee, quite a few members of their committee served on the Jubilee Committee.

The idea was there would be a whole day of celebrations starting off with the church bells ringing at 9 a.m.

There was to be a parade of floats through the village, each organisation to dress a float and choose their own theme.

On the day they were all outstanding, but some of the most amusing were the chapel float which had David Rose and Reverend Bob Ormesher dressed as savages dancing around a camp fire in a big bubbling cauldron with “white man” chanting and banging spears. The theme of the float was “meals on wheels”.

The Community Association opted for a large replica of Ermintrude, the cow from Magic Roundabout. This was created over a period of weeks by Terry Brackenbury and Mike Bowman from papier mache and was made with udders which squirted liquid. Elsie Leafe and Min Atherton put the finishing decorative touches to the float, which won first prize.

All the floats assembled on Old Manor Close, and paraded up through the village to the Governors’ Field, where they were judged.

A Ladies v Gents football match was played. Gents dressed up as women, women as footballers. Needless to say the men thought they had won, even though there was a tremendous amount of cheating on the part of the ladies. At one time they all tramped off the field to go to the loo, mainly to get some breathing space. It was very funny to see the men dressed up and trying to run in tight skirts, high heels etc. Then the Methodist Minister, Bob Ormesher, entered into the spirit of the event dressed in black ladies underwear, a tight skirt and high heels, none of which inhibited his game! His flying tackle was still very impressive.

The afternoon was given over to children’s sports and the TEA. The tea was for everyone in the village and the number catered for was well over 1000 people. The queue stretched right down Lingwood Lane as far as the eye could see. There were a few anxious moments about quantities of food.

In the evening there was a family dance in the village hall followed by fireworks on Mr Taylor’s field, The Leys. 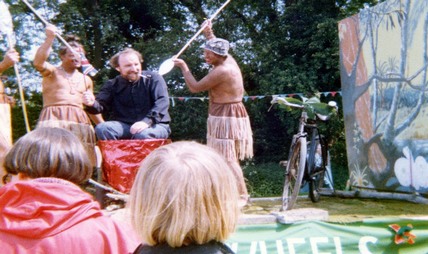 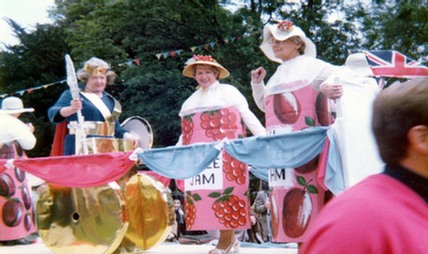