Richard’s important role in the development of Woodborough Church circa 1336: Although there are a number of sources of information on Richard de Strelley, there are few actual facts about his life and the building or part re-building of Woodborough Church. Thoroton, Joseph Marriott and the Reverend Buckland all have their different versions, and various other articles on Woodborough and its church tend to have repeated them.

From a family tree by the Nottinghamshire historian, the late Keith Train, Sir Sampson de Strelley of Woodborough married twice, firstly to Lucia de Foune, granddaughter of Robert de Somerville of Oxton and secondly, after Lucia's death to Phillipa, daughter of William Sampson of Epperstone. The Woodborough Richard was the son of Sir Sampson's first marriage to Lucia.

Richard married Elena of Waldeshoffe, he was a Knight of the Shire, a verderer of Sherwood Forest and for a time Keeper of Bestwood Haie and represented the County in Parliament from 1331-1336. It has been suggested that he took part in the Battle of Crecy in August 1346. 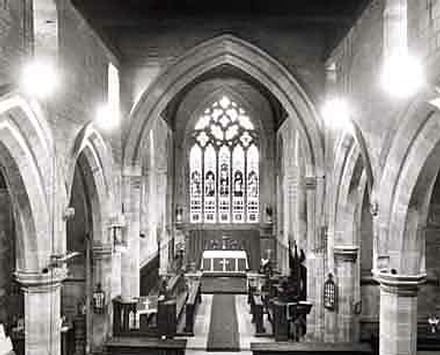 Train writes that Richard de Strelley inherited: Woodborough Upper Hall in 1336, not 1356. If he inherited it from his father Sampson de Strelley of Woodborough, when presumably his father had died in order for his son to inherit, he and his father could not have been building churches at Woodborough and Strelley at the same time.

It is difficult to believe that after Richard had built such a fine chancel for Woodborough church the ecclesiastical authorities and the parishioners would have then accepted the poor standard of workmanship evident in the later rebuilding of the nave. Left: The chancel from the organ loft

This has uncarved blocks of stone at the springs of some of the arches and a poor clerestory with the three windows on the south side and two on the north side and unbalanced with reference to the nave arches below.

It is possible that the present nave and previous chancel had been built when the Norman church was demolished and before Richard de Strelley inherited the Upper Hall. It is not known what the previous chancel was like, judging by the nave Richard could have decided that all the church needed rebuilding. If so then an unanswered question which previous accounts seem to have ignored is why, having built such a glorious chancel, Richard did not proceed to rebuild the nave? Could it be that:

1: He intended to do it but died after completing the chancel.

2: He ran into financial difficulties.

3: The plague decimated the stonemasons able to reach his required standards.

4: If as suggested, he fought in the Battle of Crecy and was wounded, he felt unable to continue with the project.

Richard de Strelley must have a place on the list of Woodborough Worthies for representing the County in Parliament, for being a verderer of Sherwood Forest, Warden of Bestwood hale [hale - a small enclosure for keeping deer], and for giving St Swithun's Church such a fine chancel.