Shortly after 1901 Thomas Robert Mellows moved with his wife and son Thomas Gilbert Mellows (born 1895) to Davenport House formerly known as Victoria Villas, next to the 1887 Wesleyan Methodist Chapel, and constructed another bake-house there in the out buildings to the rear of the house. It is thought that the bakery ceased around middle of the 1920’s thus ending almost 80 years of bread baking in Woodborough by the Mellows family.

Postscript by John Hoyland: This Main Street scene, taken circa 1913, shows the visit from Lambley of Mr P Henshaw’s horse and cart. On the rear of the cart it clearly states ‘Hygienic Bakery - Lambley’ and on the side ‘P Henshaw’. Perhaps this was providing competition for the Mellows bakery which was thought to have ceased in the mid 1920’s.

Those featured outside the Post Office are Mrs Martha Foster, Miss Gertie Foster (Mannie Foster’s mother and sister respectively) with Mr Tommy Burnett RN. The Post Office was run at that time by Charles E Foster and family. The Burnett family lived close by in the Manor House until 1915.

Other buildings featuring in this photograph are, left to right: The Bugle Horn Inn, The Post Office, The butchers, the forge run by Mr Orme, and the Punch Bowl Inn. 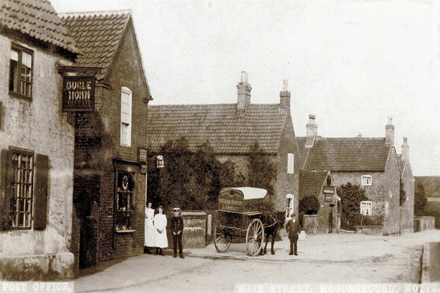 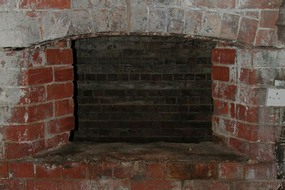 The Mellows family ancestry goes back to the early 1800’s as living in Woodborough and that they were village bakers for many years.

The first record of a baker in Woodborough was of John Mellows aged 24 who was recorded as living in the village and his occupation was described as ‘baker’ on the 1851 census, but there was no record of the address on the Census where he was living in the village. He was married to Ann Mellows (née Weatherall) who was a dressmaker aged 24, and they raised a family of 8 children.

In the 1861 & 1871 censuses John Mellows and his family were recorded as living at a cottage on Lowdham Lane which is now number 21, and at this cottage a bake-house had been established.

Right: Cottages on Lowdham Lane 1995 and below Davenport House next to the Wesleyan Chapel on Main Street circa 1923.

The Woodborough bake houses - (properties with a bread oven) 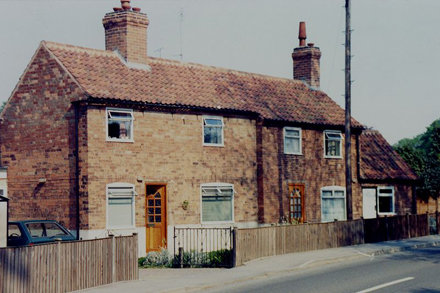 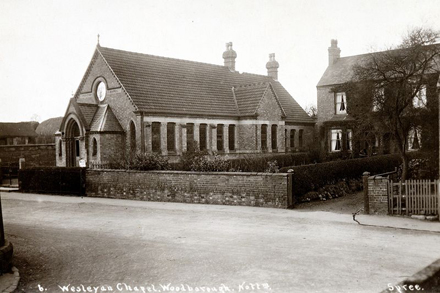 The 1881 census shows that one of the son’s, Thomas Weatherall Mellows born 1827, was by then the baker at Lowdham Lane and was living there with his wife Ann Mellows (née Baxter). They also had a son born in 1858 called Thomas Robert Mellows. The 1881 census also shows that John Mellows was still living at Lowdham Lane and by that time he was a widower and eventually died in 1884, both John and his wife Ann are buried in Woodborough Churchyard.

Ten years later records show that Thomas Weatherall Mellows with his wife Ann were still living at Lowdham Lane and that he and his son Thomas Robert Mellows were both bakers. In 1892 Thomas Weatherall Mellows died leaving his son to continue the family tradition of bread baking. This was recorded in the 1901 census and meant that baking had taken place at the Lowdham Lane cottage for 50 Years.

Photos taken in year 2000. Above left: Davenport House from Main Street. Above centre: The rear out-buildings, the bread oven was housed in the far building with the chimney. Above right: The oven just prior to removal by the current owners.

We, [Chris & David Mellows], were born as twins in Woodborough in 1946 and as we grew up in the 1950’s we were told by the aged residents that they knew both our father Thomas Gilbert Mellows and our Grandfather Thomas Robert Mellows. They could remember the Mellows Family baking in Woodborough. It was said that the loaves were 4lb in weight and that it was very good bread. The bread was made with an special recipe which we believe to have had some potato in the dough to prolong it’s freshness, and that at Christmas time some residents would take their meat to be cooked in the ‘Parish Oven’ at Davenport House. 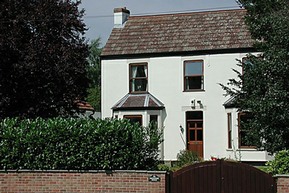 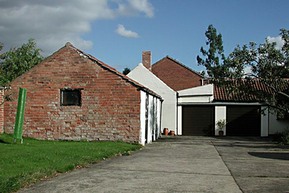 Our Trade Directory records elsewhere in this website make references to bakers as follows;

Unfortunately, apart from the Mellows family, it is not known where the other bakers lived and worked. There are no records of any bakers in Woodborough after 1925.