The Institute in year 2000, little if anything has changed externally since then.

Wooden benching around interior walls is retained only on the west and part of the north walls. The building was probably built with local Woodborough bricks, which would have come from the Bank Hill brickyard. The roof has red clay pantiles and there is a brick single story lean-to, which now houses a toilet.

The following short pieces are drawn from Mannie Foster’s memories: 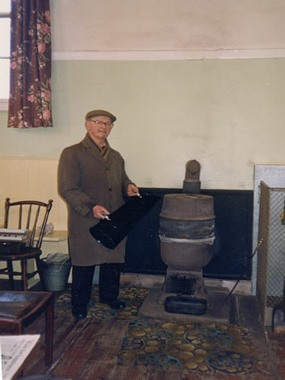 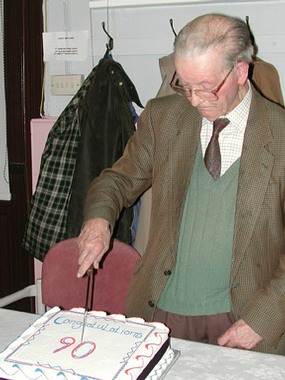 Left: Mannie Foster in 1990 stoking the old coke heater which has since been

replaced by two gas heaters. On the right: Mannie celebrating his ninetieth birthday.

The building continued to be used for communal purposes despite erection of a Nissen hut in 1947 for use as a Village Hall. In 1950 a descendant of Charles Hill conveyed the ownership by gift to four Trustees, all Woodborough residents, subject to conditions that the premises should continue to be used: ‘for the purposes of physical and mental training, recreational and social, moral and intellectual development through the medium of a reading and recreation room. Lectures, classes, games, whist drives, youth club recreations and entertainments. Provision to be particularly made for the entertainment and use of the Institute by the old folk of the Parish of Woodborough, and to be used generally for the benefit of the inhabitants of Woodborough and its immediate vicinity without distinction of sex or of political, religious or other opinions. The control of the Institute to be entirely non-sectarian. The Institute may be used by any political parties for whist drives or other entertainments with the consent of the (Trustees) but no political speeches of any kind whatsoever shall be made in the Institute at any time'.

Reported in the Woodborough Newsletter in May 1968 that having been approached by the Trustees of the Institute, Row Lane, to accept the property as a gift, Basford Rural District Council asked the Parish Council if they would be prepared to take over local management if the property were put into a completely useful state. The offer was declined.

The Trustees were given the powers of an absolute owner and the ability to mortgage, lease or sell all or any part of the property 'until the expiration of twenty-one years from the death of the last survivor of the Trustees'. In 1999 there was only Mannie Foster of the original Trustees surviving, in his eighties, and he handed over the Trusteeship to younger villagers. The Woodborough Institute is therefore an interesting example of community ownership of a building from an early date. It has remained virtually unchanged over a hundred years, apart from the removal of a gallery, and continues to provide a communal social and recreational facility for the village, despite the subsequent building on Lingwood Lane of a separate Village Hall in 1947 and the later replacement of this by a much larger building also on Lingwood Lane.

During 2000 and 2001 the Institute under went a scheme of improvements. Externally with new double-glazed windows and entrance door, and internally some new and more comfortable seating, totally redecorated plus the addition of new blinds to the high windows. Thus the Institute commences the 21st century in confident style, a popular meeting hall for small groups. 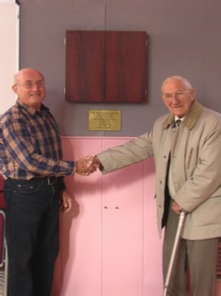 In the year 2009 further improvements to the interior were made, in particular, new kitchen units and new sink were installed as well as new electrics. To cater for slide/computer aided talks a permanently mounted projection screen was placed above the kitchen units so when not in use it retracts out of the way. For the comfort of users of the hall new fold-up seats were brought in to replace the equally comfortable but much heavier chairs bought in 2001. Additional to these internal improvements external work to re point the brickwork, replace the guttering and convert the existing toilet with new fittings which are also suitable for access and use by disabled visitors. When the work was completed the hall was officially opened by Mr Les Morgan representing the Samuel Eden Trust whose grant had financed the project.

Important changes to the Committee of Trustees in 2019.

At various times during 2018/19 the Trustees above left, who had served at least since 2011, decided to retire and a new committee of Trustees was formed and appointed in September 2019. David Burgess who has done a sterling job maintaining the workings of the Institute for many years, he will still assist the new committee to ensure a smooth take over of duties for the new trustees.

All new bookings and any queries regarding current bookings contact Richard Whincup on 07976 806320. 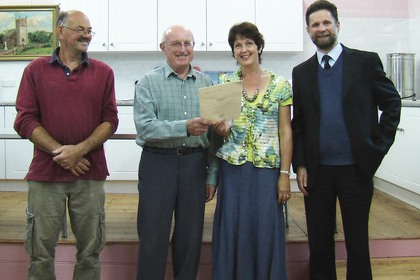 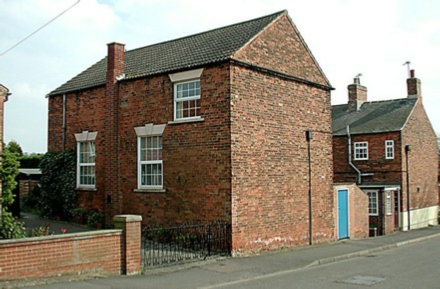 The Institute is a simple, plain two-storey red brick building, erected in 1827 as a Wesleyan Methodist Chapel with a blank-gable end on to the road, the land having previously been bought in 1826, the whole structure almost fills the site. This followed a resolution by ten members of its congregation, and designed to hold 150 despite its small size of 24ft x 33ft. High windows on the two long sides of the building indicate the original existence of a gallery inside and there is a bricked-up door on the entrance side below this. The gallery was removed in the early part of the twentieth century, leaving a single large room extending to full height (two storeys) of the building.

There is a simple wooden dais across the eastern end, which now has kitchen units along part of the east wall. The original cast-iron stove was replaced in 1992 with two gas fired wall mounted convector heaters. 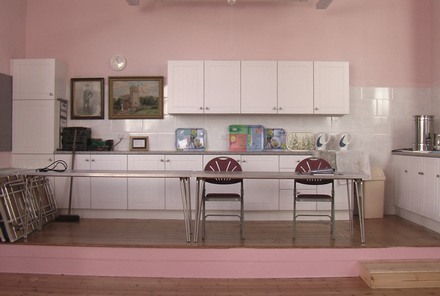 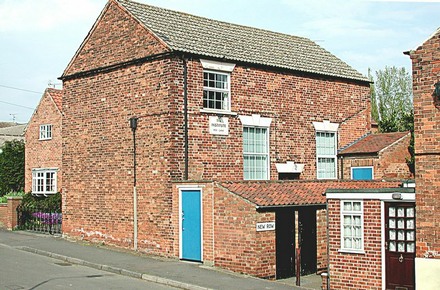 Left: The interior of the Institute showing its fully refurbished state in 2009.

Right: Les Morgan (right) officially reopened  the building and is pictured here in 2009 with David Burgess Chairman of the Trustees at that time. 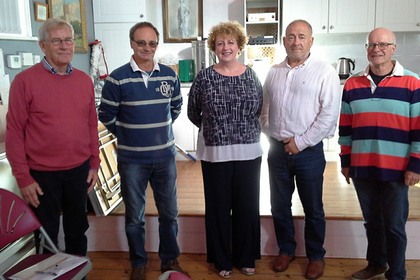 The new committee from 2019 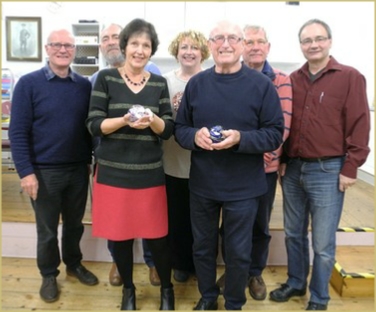 On 2nd December 2019 a presentation was made to the outgoing Trustees who were thanked by the new Trustees.