On January 14th 1919 it was proposed by the Chairman of the Parish Council, Mr C H Hill that a parish memorial be erected for the Woodborough soldiers who had perished during the war. It was agreed at a later meeting, that a committee should be appointed to further consider the memorial and report back. The people nominated to the committee were C E Foster, A Burton, J Kelk, J P Poole, H Bish, Mrs C E Foster, Mrs Mabbott and Mrs Shipside. About the same time a meeting was also called to consider a “Peace Celebration” in the parish. It was agreed that the celebration should be held on the August Bank Holiday of that same year.

On the Bank Holiday at 2pm the Woodborough Band led a procession through the village and at 2.45pm a Thanksgiving Service was held. At 3.30pm a tea was given to the children of the parish followed at 4pm. by a tea for the surviving Woodborough soldiers, their wives and all the elderly people of the parish who were seventy years old and above. The event finished with the distribution of sports prizes followed by music played by the band.

In October 1919 it was agreed, subject to the Parish Council’s approval, that a village cross be purchased and placed in the Churchyard. The estimated cost was approximately £140. A group of people were appointed to canvas the village for proceeds. In November of the same year, the Chairman of the Parish Council stated that it was his intention to have a memorial stained glass window fitted in the church costing approximately £250.00.

Right: The cover of the 1921 Order of Service for the War Memorial

It was announced on January 23rd 1920 that an amount of £95.2s.2d. had been collected from villagers and a year later a memorial service was arranged to be held on Thursday, March 31st 1921 at 3pm. The monument would be unveiled and the stained glass window in the Church would be dedicated in memory of the Woodborough fallen.

The service was led by the Rev’d. J P Hale, MA. DSO, Rector of Cotgrave and previously an army chaplain during the war. Also present was Col. F E Seely J.P, CC whose duty was to unveil the memorial. The service began with the National Anthem and three hymns and two psalms were also sung. The stained glass window was dedicated and this may still be seen in the chancel of St. Swithun’s church. The choir and clergy then made their way out to the memorial cross situated in the churchyard. They were immediately followed by the relatives of the fallen, ex-servicemen under the command of Capt. Hill and then the congregation. Col. Seely then unveiled the memorial cross, another hymn was sung and the Last Post and Reveille sounded.

The unveiling of the War Memorial with the names added of those who died in the Second World War: According to the Woodborough Newsletters of April and May 1952, the unveiling of the new inscriptions on the existing war memorial was on Sunday 4th May 1952 at 3.30 p.m., and was undertaken by Air Vice-Marshall R L R Atcherley, CB, CBE and AFC. 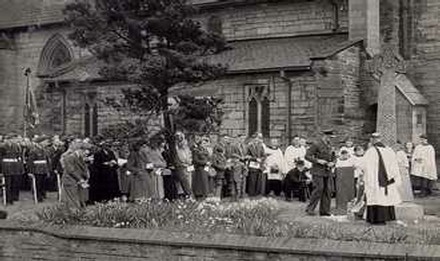 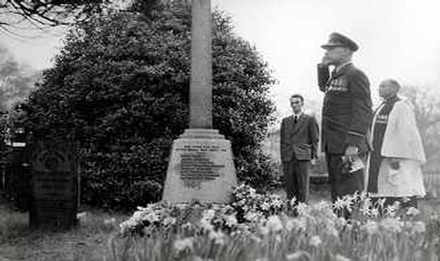 Left: The service for the unveiling in 1952 and right Air Vice Marshall Atcherley.

The weather at the unveiling might have been ordered specially, and consequently the ceremony went off most satisfactorily. We were very much indebted to the RAF, first to the Air Vice-Marshall who had a local interest in it as a resident, and then to Wing Commander Harding of Newton and his men, including the Station Band, who added dignity to the proceedings. Cost of the Inscription on the War Memorial and repainting other names was £14.17s. 0d.

Annual Remembrance Services and parades continue to be held.

Detailed research was undertaken to identify the persons listed on the Woodborough War Memorial 1914 –1918. Considerable information was learnt about most of the men named and also about their ultimate fate. A similar research exercise was undertaken in 2007/8 to identify those named who died between 1940 and 1945. 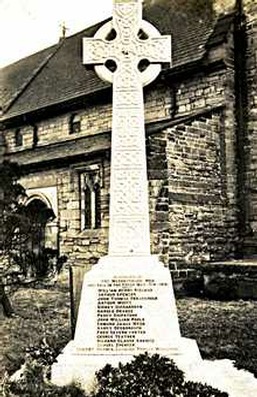 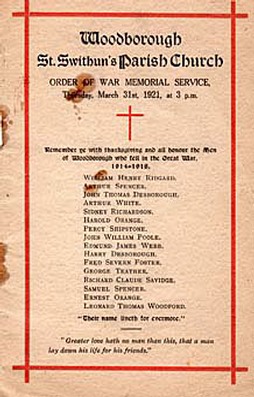