Woodborough’s Feast Steam Fair - The end of an era

Woodborough village’s annual St Swithun’s Feast in 1990 came to the boil with a display of steam powered engines and organs at the Four Bells pub. The display in the pub car park on Main Street rounded off a weekend of activities including sports, fair rides, a Church service and a parade by the Calverton Miners’ Welfare Band.

The Band played in the grounds of Woodborough Hall following a Church service to a packed congregation at St Swithun’s on Sunday. The Feast weekend is especially popular with children who take part in the sports day and get the Monday off school as a holiday each year.

One of the organisers Mannie Foster, 78 (in 1990) said “the celebration’s origins have been forgotten” but he has been helping run the event since 1928, “and it was going a fair few years before that” said Mr Foster, who was born at Woodborough’s Post Office and still lives in the village.

The 2005 Steam Fair on the car park of the Four Bells, photograph taken by Grenville Armstrong of Market Warsop.

Mannie Foster has seen the steam engines arrive dozens of times before. But that does not make the excitement any less. Mannie, 93 in 2005, organised Woodborough’s first Steam Evening, and the 73 that followed to date. This Saturday, he will be the guest of honour at the 75th. The event still returns him to the wonder of childhood. “The children would come out of their houses and run up the street next to the engines. I have always been interested in the steam engines, you can see them working - the movement and the motion”, said Mannie.

The unwavering support of Mannie, a former fruit and vegetable farmer, was a big factor in keeping the event alive. He said: “I just wanted to keep the evening going and not let it die out. “The Ashley Brothers used to bring their Galloping Horses, known as the merry-go-round, which were a favourite. And the cake-walk, the moving floor, was always popular. The children always liked to see the steam engines working with their pistons and the smell of the coal. It’s nice to be guest of honour, but a little bit embarrassing”.

This year Woodborough Community Association are running the event, in the car parks of the Nag’s Head and Four Bells pubs. There will be five steam engines, including two showman engines as well as two 100-year-old roundabouts. There will also be a swing boat, a can-can dance display to the tune of a steam-powered organ and a show of First World War model tanks.

For those who dream of petrol engines, there will be a classic and vintage car show. Linking the two sites will be a Lincolnshire bus which was swept out to sea during the floods along the East Coast in 1953 and has since been rescued and restored.

Mavis Leafe, Secretary of the Community Association, said: “Many people had to leave the village in their twenties because of rising house prices. The festival gives them a reason to return to the village and to catch up with friends”.

The 2005 Steam Fair on the car park of the Four Bells, photograph taken by Grenville Armstrong of Market Warsop.

A steam festival is to be re-named in memory of the man who organised it for 74 years. John Mansfield Foster, known as Mannie, who died aged 94, he lived in Woodborough all his life. He helped found the village’s steam evening, which features vintage engines and organised every one until last year. Sadly this lasted for one more event.

Richard Pietkiewicz, the then Chairman of Woodborough Community Association said: “We want to acknowledge the hard work Mannie put in to arranging these steam fairs over many years and also for what he has done for the village. A lot of children remember him going into school and telling them what Woodborough was like when he was their age. Mannie was very modest but had a strong personality as well. He stood up for what he believed in. It’s the passing of an era”.

Mannie’s parents were Charles and Martha Foster, who lived in the Woodborough Manor. He was born in the Post Office, opposite St Swithun’s Parish Church on March 4, 1912. He was the eldest of four children. He studied at Worksop College, learning the organ, before returning to Woodborough, where he was a market trader, a farmer and a governor of the village school. He died on June 5. 2006 at Nottingham City Hospital.

His niece Dr Sheila Foster-Smith remembered: “He grew absolutely beautiful strawberries. Mannie was very gregarious and had many friends. He loved visiting Dorset and Devon and had an affection for Winchester Cathedral named after St Swithun like his beloved Woodborough Church ”.

Truly the end of a remarkable era

FOSTER - John Mansfield of Woodborough, aged 94 years, eldest son and last surviving child of the late Charles Ernest and Martha Elizabeth Foster of Woodborough, died peacefully at Nottingham City Hospital on 5th June 2006 - the funeral was held at the Parish Church of St Swithun, Woodborough on Monday 19th June 2006, at 12.30pm. Flowers, or if preferred, donations to the British Heart Foundation.

Also see many photographs and read the testaments from those who knew Mannie: 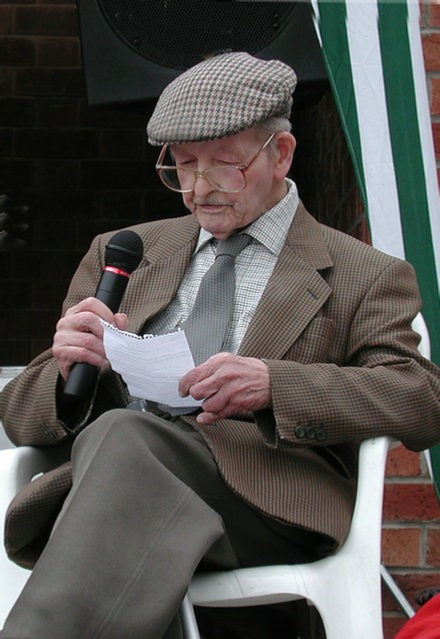 Back to topNext page