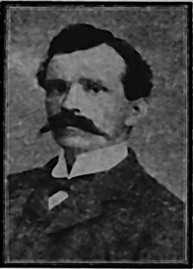 William Henry Ridgard was born on 2nd April 1871 in Lenton, Nottingham to his father, also named William Henry and his mother Elizabeth. He had ten siblings. During the early part of William junior’s life, the Ridgard family lived in Broad Marsh, Nottingham.

On 7th April 1890 William junior married Lily Stevenson at St. Peters Church, Nottingham. They continued to live in Broad Marsh for the first few years of married life where William‘s occupation was a barber. Their first born child was William Charles who was baptised on 24th August 1890. In 1896 they had another child named Ernest. Unfortunately, Ernest died in September of the same year.

It is in the 1901 census that we find William, Lily and 10 year old William Charles living on Main Street, Woodborough. In this census, his occupation is shown as a hairdresser and photographer. In the 1911 census his occupation is hairdresser only. It is thought that he had a number of other jobs around the village, namely newsagent (noted in the 1912 trade directory) and assistant brewer at the Nags Head. His legacy to Woodborough is his many photographs taken of the village and its people, particularly weddings and also the local cricket and football teams.

William may well have been the oldest of the Woodborough soldiers who went to war and did not return. He was also the first Woodborough man to be killed in the war and as he died during the early stages, it may be assumed that he was a volunteer. He enlisted at Epperstone, probably at the Cross Keys Public House which was used as a recruitment station. It also seems likely that he volunteered at the same time as fellow villager, Arthur Spencer as their service numbers coincidently have only three digits between them. Both men joined 1/8 Battalion Nott’s and Derby’s Regiment (Sherwood Foresters) and this was to eventually take them to Flanders in April 1915.

The 1/8 Battalion were serving in the Kemmel sector of the Ypres salient during the 2nd battle for Ypres. Kemmel is 6 miles south west of Ypres. They occupied a line of trenches between an area known as Peckham Corner and Petit Bois. Their billets were in the nearby village of Locre (now Loker) which is 2 miles to the west of Kemmel.

The exact circumstances leading to his death have only recently been uncovered. It is recorded in the regiment’s diary that on 7th May 1915, “Lance Cpl. Ridgard died of wounds – head”. However, his gravestone states 8th May. 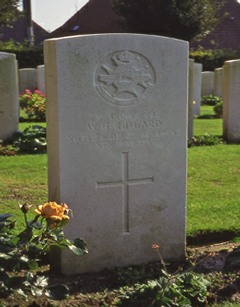 It is very unusual that his name was mentioned in the war diary as normally it was only officers who were named. It was thought his cause of death was due to a sniper as this was a common cause of head wounds and indeed more recent information confirms this to be true. It seems he met his death while constructing a dugout for his captain, and while crawling on the roof, he was picked off by a sniper. He was 44 years when he died.

William is buried in Loker churchyard in the British extension of the civilian cemetery. Loker is a small farming community, not unlike that of Woodborough. 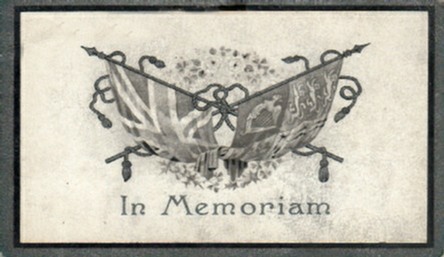 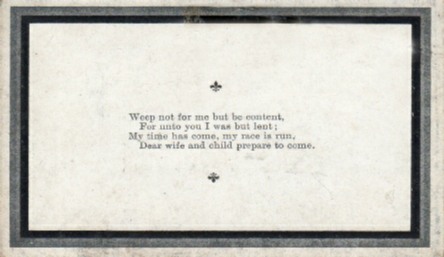 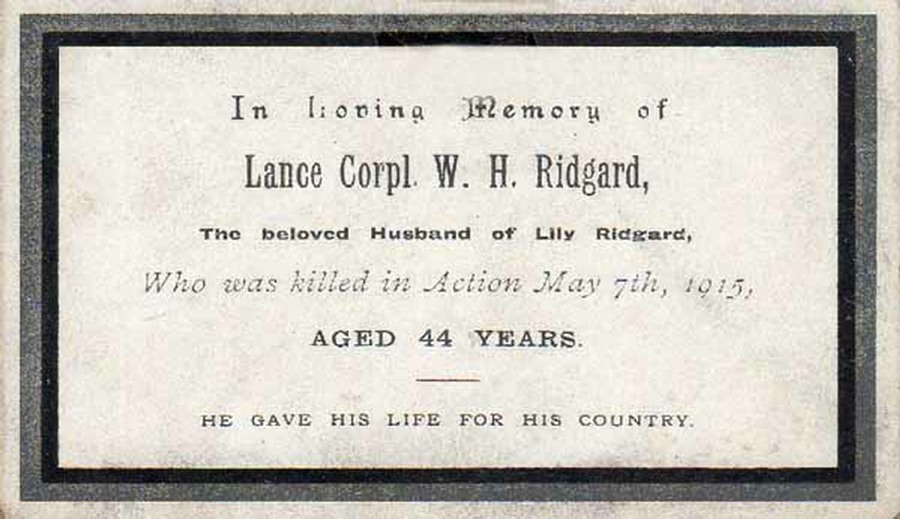