This we owe to the taste and ability of Mr Bryan Parker assisted by Mr Norman Binch. We were fortunate, too, in finding Messrs Allen, Solly and Co. so helpful, and Mr Desborough willing to operate the stocking-frame. It was important that any exhibition such as this should refer to the inventive genius of William Lee for he had close connections with Woodborough even if he wasn't born here.

"It's over 100 years old." How often does one hear that remark made as if to confer on some object a sort of hall-mark of quality. Naturally, age alone does not give quality, but it may add to that character if it already existed at the time the object was produced. And among the assemblage of Village Treasures brought together for the "Festival Exhibition" there were many items to which time had given that added quality. Outstanding among its surroundings was the fine Jacobean table presented to the Church as a thank offering at the end of the Civil War. And what more suitable staging could have been found for the exhibition of the old Communion Plate? The chair in the centre of the photograph on the left was carved by Richard Ward who was also a carpenter at the time of Mansfield Parkyns.

Closely allied to these two contributions, but having a more domestic association, were the old Bible boxes, once the honoured repository of the Family Bible and its cherished records of births, deaths and marriages.

The pictures these heirlooms conjure up help us to put in their proper place those lace-trimmed caps, the charming gowns, the samplers produced to record the young maiden's dexterity with the needle, and those numerous specimens of porcelain and earthenware, some of which were assuredly reserved for special occasions and are now valued occupants of cabinet or mantelpiece. 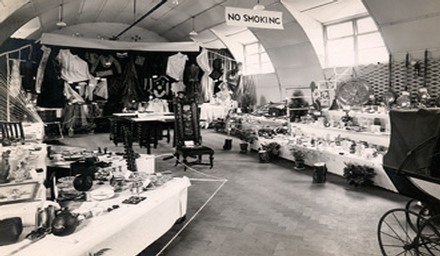 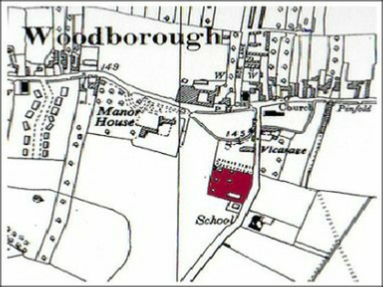 This event took place from 25th June to 4th July 1951. The following was reported in the August 1951 edition of Woodborough Magazine, it tells of local people putting on a significant exhibition of 'Village Treasures' in the Old Village Hall, which attracted over 1000 visitors. Earlier in the June magazine it was reported that "chairs 200 years old; old maps; bible boxes; samplers; drinking mugs from China and Germany; the sign of The Half Moon Inn; a brass coach post-horn; Greek pistols; English duelling pistols; Woodborough photographs of bygone days; candlesticks from Bethlehem;" these were just some of the treasures that would be on show. In fact even today, villagers who were involved still speak of it with fond memories some 51 years later. (2002 Ed).

Two things about the Exhibition, first, it would have been impossible without the Hall to stage it in. The Hall would not have been there but for Mr Harrington's boundless energy and determination. Secondly, what turned that which would have been ordinary into something notable was the staging and arrangement.

Marked in red the position and  plot of the old Parochial Hall, long since demolished. 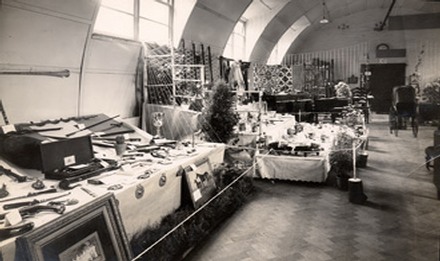 Interior of the Parochial Hall on Lingwood Lane, where the exhibits were displayed.

Brass-ware was particularly well represented, the earliest specimen being a mediaeval hand-warmer. These were not the possessions of the ordinary cleric, their use being reserved for those with special privileges. They speak of early services in cold churches—but the sparkling Georgian teapot, the cheerful bed warmers and meat-jacks meant warm hospitality and a welcome hearth, while the capacious old beer-jugs and tobacco boxes provided other cheer.

Husbandry was suitably represented by the shepherd's crook, the early bean-dibbers, the wooden yoke—and maybe someone in the village could remember when last the sound of iron-ringed patterns evidenced the scrubbing down of yard or pavement.

Among the records special mention can be made of the map of 1835 with its wealth of information. What funds of knowledge here await a Parish Historian, who may also live to praise the preserver of the Court Leet Records and that old Rate Book (1867).

It was only fitting that a Woodborough Exhibition should feature the Stocking Frame as well as some relics of its inventor; William Lee (though "supposedly" might well be added to the attribution of ownership).

Did you thrill, you local cricketers, at the sight of "William Hogg’s Old Cricket Bat"? And did those ribbons of South Africa, Sudan, Khartoum—of 1914/18 that photograph of the old "South Notts"—remind the National Service youngsters of today that their fathers and grandfathers not only served in their day, but willingly gave of their time to fit themselves for the call which came to each is his season. Naturally, short of a lengthy catalogue, it would be impossible to say something about every section of the Exhibition, ranging as it did from Roman deanery found in the parish (one was dated 60 B.C.) to oriental porcelain and carvings and a Railway passenger's candle—and—matches set, not forgetting a fine example of a patchwork quilt.

Woodborough is to be congratulated on the inception of the idea and on the excellent way in which it was carried out.

By: A. Parker (late Curator of the Castle Museum).

MUSINGS ON THE EXHIBITION

Back, back into the realms of memory slides our 1951 Festival Exhibition, and back into the homes, which have so long sheltered them, go the treasures of bygone years. Another page in the history of our beloved Woodborough has been written.

How our imagination worked as the various exhibits unfolded to us their story. The busy hum of industry came from the stocking-frame. Once more the ladies tripped along on patterned feet, their billowing skirts clipped high from the besmirching mud. Once more the coaching-horn's loud call came echoing down the valley. Faces of those long since passed on gazed at us from their yellowing frames. On to some long-forgotten village green came the all-conquering cricketers, and soon the air resounded with the crack of ball on bat, scores mounting high and final triumph theirs.

We scanned the old Church registers, and pondered on the scenes the ancient altar-table must have witnessed, while the gargoyle brooded with phlegmatic gaze. In school the children bent to their task, courting the master's smiles though shrinking from his frown.

So on to the treasures brought from other lands. Fragments of a life foreign to our own rest here in Woodborough, and doubtless in some remote village of another hemisphere some part of our own village exists unknown.

Here was a feast of craftsmanship. The potter's art, the seamstress's skill, the carpenter's dexterity, the inventor's genius—all were here for our delight. Memories of famous women and famous men, preserved in medals, weapons and in script, link us in modern times with such great characters as "The Lady with the Lamp," the Duke of Wellington, and, locally, William Lee of the stocking-frame. Assuredly ours is a goodly heritage.

The Exhibition, no longer with us as a corporate whole, is none the less continually in our homes. Things that perhaps had seemed to us of little worth have now achieved their true value. Our grateful thanks must be recorded for the, inspiration which prompted the original idea, for all those who worked to convert the idea into fact, for those whose loan of exhibits made for success, for those whose constant guard ensured safety, and for those who came from far and near as witness to their interest in our efforts. (53 people helped to keep guard day and night, and we estimate that there were over 1,000 visitors. 1951 Ed.)

We in this tiny part of our own England are proud to have contributed in some measure to the island's story. May all that is best in the past be our inspiration in the future which beckons us?
Miriam E. Foster.
* * *
Our Exhibition of Curios and Antiques seemed to bring Woodborough into the limelight—we were spoken of on the Wireless, and reported in the papers. It was an outstanding success and we shall remember it for a long while; its memory might even go down in history. Such an event is a great link with the past and with those who have gone before, whose race is run and whose prize is not of this world but of the city of God.
M. Z. Mead.
* * *
Overheard at the Exhibition. "Aren't Woodborough people friendly? I'm a stranger here, but all round the room people have been talking to me."
Nothing changes, me thinks!! 2002 Ed.