It appears that Arthur joined the Territorial Army (TA) of 1/8 Battalion Sherwood Foresters in November 1908 where he was listed as a farm labourer working for Mr. Dring and others. From army documents we learn that he agreed to four years overseas service in the same regiment. He joined the TA at Epperstone where his service number was 758. A fellow villager, William Henry Ridgard also appears to have joined up at the same time. In April 1909, at Epperstone, Arthur was certified fit for the Territorial Force and it was recorded that he was 17 years 9 months old, 5ft 2¼ inches in height with good vision and physique. Before the outbreak of World War One, he underwent training in Scarborough, Aberystwyth and Thoresby. On 5th August 1914 he was embodied in the regular forces and was posted to France on 2nd May 1915. He was promoted to Lance Corporal on 1st September 1915. Arthur was killed in action at the Battle of Loos on 14th October 1915. He was 24 years old.

The 1/8 Battalion Sherwood Foresters was part of the 46th (North Midland) Division and it was partly their task to recapture the Hohenzollern Redoubt situated on slightly higher ground near the town of Loos. A North Midland memorial stands near the spot where the division commenced their attack on the enemy on 13th October 1915. It is on the outskirts of the village of Vermelles. Their target, the Hohenzollern Redoubt, lay to the north-east of this point. To reach the enemy, the battalion had to cross open territory and naturally became prime targets. Not only had they to overcome gunfire but also the use of gas. The fighting intensified and there were very many casualties.

Out of the whole division, 180 Officers and 3,500 other ranks were lost in the battle. Because of the ferocity of the fighting, the bodies of many of the men who were killed in action were never recovered. They simply vanished from the face of the earth. Arthur was one such person and because his body was never found; his name is commemorated on the Loos Memorial at the British War Cemetery, Loos. His name is one of 21,000 names commemorated on the memorial wall and most of these men fell at the Battle of Loos.

The Battle was a disaster for the British Army and led to the forced resignation of Sir John French, the Commander in Chief, who was superseded by General Haig.

After the war, Arthur Spencer was posthumously awarded, three medals; the Victory Medal, the British War Medal and the 1914/1915 Star. These three medals were collectively known as “Pip, Squeak and Wilfred” and were named after three characters, - Pip, a dog, Squeak, a penguin and Wilfred, a rabbit who appeared in a popular Daily Mirror comic strip around that time.

Right: A small section of the impressive 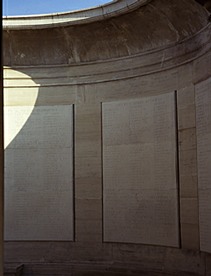 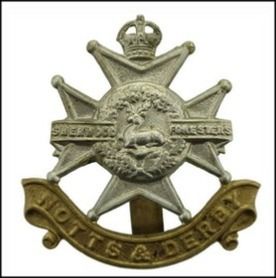