The Evening School will be held on the evenings of Tuesday and Thursday during the winter season. Courses of lessons will be given in Sound and Light, the British Colonies, English History and Mensuration.

The lessons in Light and Sound will be illustrated by numerous experiments. The magic lantern will be used from time to time to illustrate the lessons on the British Colonies. The earlier period of English History will be taken. 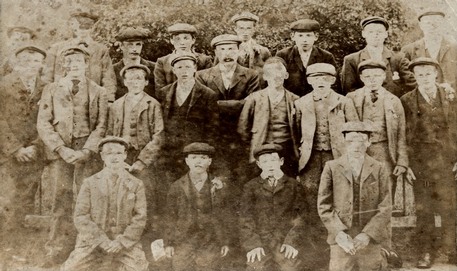 In mensuration, or land-measuring, students will be invited to measure sketches of fields, allotments, gardens, etc., and the will be worked out in the class.

The County Council of Nottingham has granted the sum of 15s. 3d. for a prize fund, and this will be distributed amongst the following students who made the highest number of attendances during the last session. The School was open 43 times, the table below shows those who were prize winners. The classes are free.

Note: Many early editions of the Newsletter are missing, from those available no other reports have been found so it is not known for how long these classes survived. [Ed 2015]

Mr George Briggs, standing centre just in front of the