Introduction: Mass Dials, or scratch dials, are medieval, dating between 1100-1600. Dials are usually found on the south walls of churches. They were usually near the main door or the priest door, which gave direct entry to the chancel of the church and they are about four to five feet above the ground. It is supposed that they were made and used by the clergy to show the time when the service would start.

At St Swithun's Woodborough - the photograph (Fig 1 top left) shows the southern elevation of St Swithun's and in particular the chancel and modern vestry which was built quite possibly around 1976.

On the outside south chancel wall there are several dials one approximately 80 mm (Fig 2 left) in diameter which has a hole in which a central gnomon would be placed. It also has 24 inscribed dots around its circumference. A similar design (Fig 3 below left) but slightly larger worn dial is inscribed 1723 (although the date and dial may not be contemporary). On the same stone as this dial is to be found a very much smaller dial of the same design.

About 8 or 9 inches across and rather roughly cut, they came in a wide variety of designs from semi-circles of dots to complete circles with associated radii. Their chronology is difficult to determine but simple versions with only four or five lines are early whilst those with numbers round the edge (rare) are late.

Frequently, several appear on one church but no regional variation in design has been established. Their boundaries of occurrence are slowly appearing. Some counties e.g. Lancashire and the West Riding of Yorkshire, have few dials whereas others, e.g. Gloucestershire, Lincolnshire and Kent, have many.

The gnomon, invariably missing, pointed straight out horizontally and so the dial would not record the same hours at all times of the year. The mass dial is any case usually regarded as an event marker for the church services rather than a time piece.

Due to rebuilding, mass dials can end up almost anywhere on a church, even a north wall. They are frequently found inside, a later added porch over the south door for example, but in the case at St Swithun's, it is a later built vestry that covers the priest's door and some mass dials which were once on the outside but are now enclosed.

It is interesting to note that in the vestry there is one dial (Fig 4 above left), which can be seen on the wall at the left hand side of the door, (this would have been originally the outside wall). It consists of a faint inscribed circle approximately 150 mm in diameter with a blank hole in which would fit a central gnomon. Inscribed at the clock positions of 4, 5, 6, and 7 o'clock are radial lines which could represent times of services.

Near to, but not necessarily associated with this dial, are inscribed dates 1733 and 1762. It is difficult to determine the age of the dials at Woodborough. Perhaps a clue may be the graffiti in their vicinity which show dates from the 16th century. It is thought unlikely that a priest would vandalise his church with graffiti.

Arrow Head sharpening, there are several examples of vertical grooves where quite possibly the sharpening of arrow heads took place. Grooves can be clearly observed (Fig 5 above right) in the stone work on the south wall around the area where mass dials are also to be found.

They are also to be found in the modern vestry (Fig 6 right) and on nearby buttresses. The cause of these grooves has been attributed to the practice of sharpening arrow heads. What the arrows were used for and when the grooves might have been made may be impossible to determine.

Graffiti can also be found on the same wall as the mass dials. These (Fig 7 right) consist mainly of initials and dates or years. It is not known if there is a direct correlation between mass dials, grooves and what appears to be early graffiti.

For a more detailed research go to the following link: 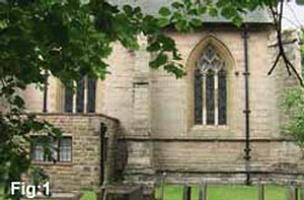 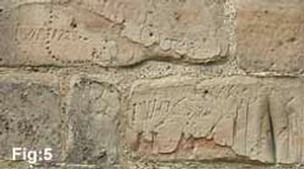