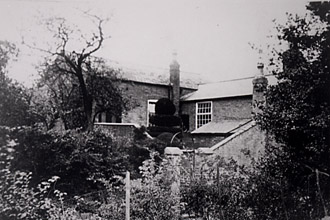 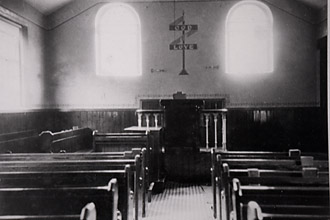 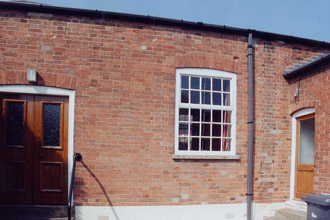 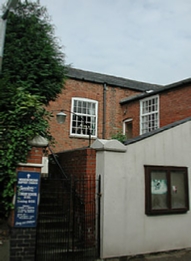 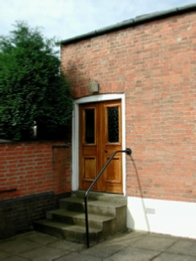 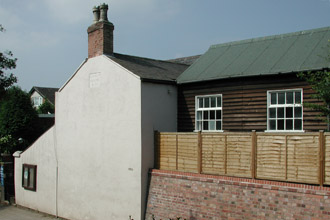 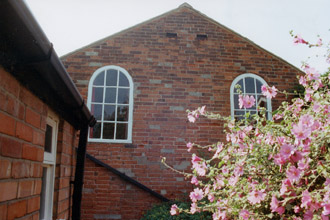 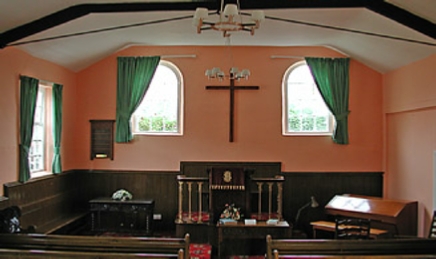 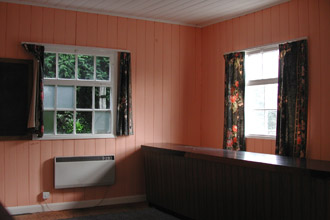 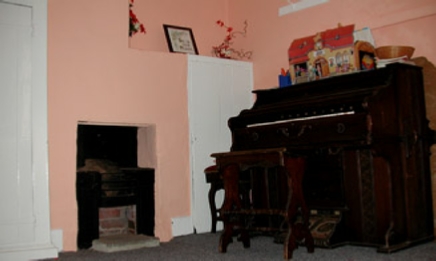 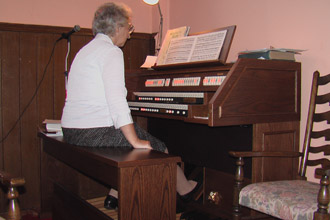 Recent recollections of the Baptists by Peggy Checkland

In 1919 my father, William Chamberlain came to Woodborough as manager of the Woodborough Industrial and Provident Society, this being a general grocery shop situated where the village Post Office is today (2001). My parents having been brought up Methodists intended joining the Primitive Methodist Chapel.

However during his first week at the shop, Mr Edwin Spencer, the then elderly secretary of the Baptists asked my father, who was a local preacher, to take the Sunday service.

At the close of this service the members pleaded with him to join them "you are just the young man we need". My father thought and prayed about it all that week and came to believe that the Lord had called him to help the Baptists. And so my parents duly became members and my father was baptized into the faith at George Street Baptist Chapel in Nottingham. He soon became the secretary and also the Sunday School superintendent and these offices were held until his illness in the late 1962, which compelled him to resign. He died in 1967 a firm believer in the Christian faith. Left Mr William Chamberlain in 1960.

One of my Sunday school teachers, Samuel Desborough, was a great character, Sam always referred to his scholars as 'my young friends'. He was the Chapel treasurer for many years. Being very deaf he used an ear trumpet and would sit under the pulpit and I remember several preachers almost jump out of their skin when Sam would suddenly proclaimed in a very loud voice "Alleluia - praise the Lord". At the close of the service the preachers would be eager to shake his hand, but Sam's reply (in his Woodborough accent) was - "just a minute my friend I must ger owd at money fust, then I'll talk to yer". Sam was a Deacon and Treasurer for 50 years, he died in 1947. Left Mr Samuel Desborough in 1940.

Another member was Joseph Clayton, a Baptist preacher. He would walk miles to take a service, he always sat at the back of the chapel, if he thought the preacher was taking too long with his sermon he would bang his stick on the floor giving a strong signal that enough was enough!

Jim Small was another teacher, a formidable character. We had Sunday school at 10.00 am, afternoon Sunday school at 2.00 pm followed by afternoon service in the chapel. To make sure every child went into chapel, he would stand guard by the door with arms outstretched making sure no child escaped.

The highlight of any year was the Sunday school anniversary held on the fourth Sunday after Easter. A platform was erected, filled with children in their Sunday best, eager (at least some were) to give their recitations and sing the anniversary hymns accompanied by the choir, who sang an anthem on this special day. On Monday afternoon the children were loaded on a dray, with organist Mrs Florrie Barker playing the harmonium. We stopped at various places in the village and sang our anniversary hymns accompanied on foot by any choir members who could attend. A public tea was provided in the chapel schoolroom for 9d. Other highlights of the year would be outings first to the Arboretum in Nottingham, then later to Matlock in Derbyshire and finally to Skegness, Mablethorpe or Cleethorpes all on the Lincolnshire coast. These took place in August when the children would be on school holidays. My father ran a well-attended Christian Endeavour group; we gave concerts and from time to time enjoyed chapel socials.

During the early 1920's the schoolroom was extended, divided by partition. The George Street Baptists in Nottingham had the care of the chapel and the Ministers I remember included Rev’d L Wide, Rev’d W H Condy, and the Rev’d George Midgley. The George Street Baptists closed soon after the war ended. We have preachers come from around the Nottinghamshire county who give their services freely each Sunday. Derek Smith from Cross Street Baptists in nearby Arnold came as leader or lay pastor in 1963. During his early ministry the Baptistery was opened up and re-tiled enabling candidates to be baptized in the chapel.

December 7th 1969 was an historic day in the events of our church. On that day, during a service, Mrs Pauline Taylor was baptized by Mr Derek Smith. It was the first time in living memory that a baptism had taken place here; we are pleased and proud that it is now possible. 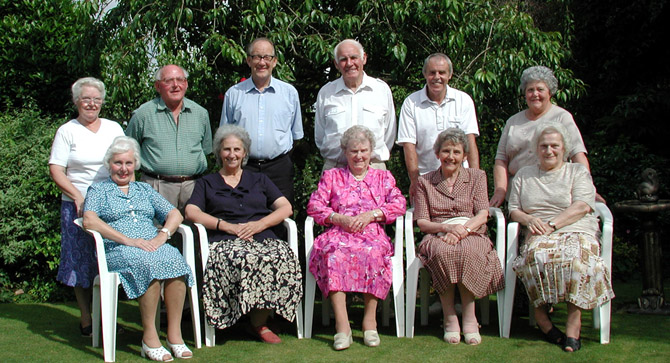 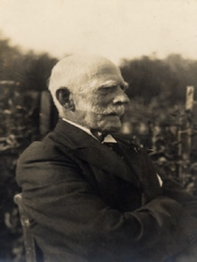 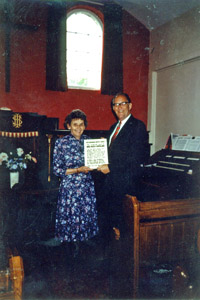 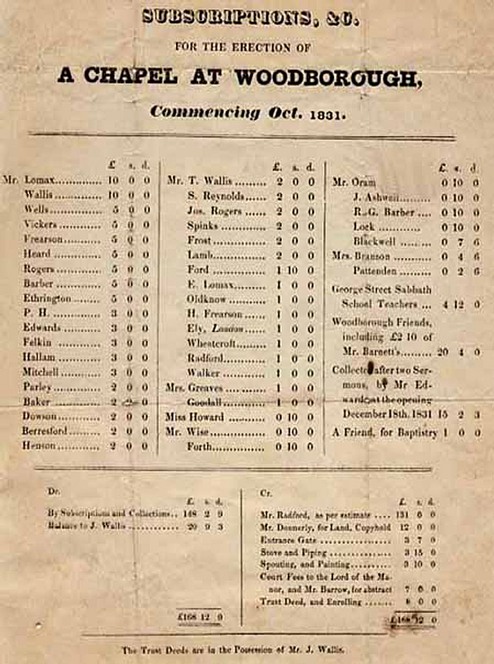 The cost was met largely by the George Street friends, but money was soon raised locally to repay the debt and the land and Chapel was put into the care of Trustees. These are named in a document of 1832 recording the copyhold of the Manor of Woodborough. Names of the Trustees change and can be seen in the later Copyhold Court documents. The Indenture document of February 1833 describes the Trustees as belonging to "that branch of Protestant Dissenters denominated Particular Baptist for exercise of Divine Worship on the Lords Day and at all other times as may seem good and also for the instruction of poor children at such times as the said Chapel shall not be occupied in the exercise of Divine Worship".

When William Clay died in 1849 he was buried in the Chapel itself, his wife Mrs Mary Clay (née Greaves) died earlier on the 6th November 1833. Recorded in the Church book of the period was a memorandum - "We the undersigned members of the Baptist Chapel of Woodborough and Calverton having been called to sustain the loss of our highly esteemed friend and brother William Clay who departed this life on 3rd November 1849, do hereby agree that as a token of affection in which he was held - his remains should be interred in the Chapel at Woodborough, to which he was so much devoted. But it was also agreed that this shall be considered a solitary case, and no future repetition of the same kind for various reasons be allowed hereafter" the memorandum was not signed. The memorandum continues - It however proceeds, "William Clay was chosen a Deacon at the formation of the Baptist Chapel which office he filled to the close of his life with great fidelity". Signed Samuel Ward (Pastor). At a later stage the Woodborough Baptists merged with Calverton Baptists.

The formation of the Chapel in Woodborough: The Baptist Mission in Woodborough can be traced back to 1810 with a small group formed by George Brown holding prayer meetings at the home of William and Mary Clay (a Woodborough tailor), and later the group was lent a barn belonging to Benjamin Greaves. This was in the grounds in front of the Nag's Head Pub on the corner of Lowdham Lane and Main Street, although in the summer this arrangement was a problem because the barn was needed for other purposes.

Baptist Chapel on Shelt Hill circa 1930

Also in 1810 Mr Samuel Ward was formally recognised as a Baptist local preacher in Woodborough as well as the neighbouring villages of Arnold and Calverton. At this time he carried on his business as a lace manufacturer at St Peter's Gate in Nottingham. He was admitted by gift a burgess of the town on 26th July 1820. Mr Ward was invited to accept the ministry of both Woodborough and Calverton Chapels. A more formal step was taken in 1831 when Samuel Ward, a Deacon of the Woodborough Baptists and who was also a member of the George Street Baptist Church in Nottingham came as visiting rural preacher. He established a formal link with the Baptist Society and preached the first service in Woodborough "on the second Sabbath" of 1831.

According to newspaper reports of the time, a considerable number of people assembled to hear him preach a text from Romans 4, v.21 - at the evening service, some 200 attended and the text was from Romans l0, v.17. The George Street members were very supportive, especially Adsolom Barnett, James Wallace and John Dawson, Minister at Arnold. William Clay became its first Pastor and Deacon also serving Calverton. In November 1834 he was ordained at Woodborough and to this village he moved his lace machines and workmen, but shortly afterwards sold his machines and gave up his business in order to devote his whole time to the increasing work of his ministry. On the 31st March 1859 he resigned his ministry as a consequence of advanced age and other infirmities. Almost his last words were "I am going home - this is not my home. I shall soon be there, a far better home, and there will be many friends to meet me". He died on the 24th January 1860.

Clearly it was necessary to find larger premises for such congregations and in 1831 the George Street members helped financially (see below) to purchase a small plot of land on Shelt Hill (then called Dark Lane). The land was part of an orchard belonging to Charles Donnelly and is described in the legal documents as "thirteen yards from east to west and twelve yards from south to north". This Chapel was built and opened in November 1831, at a cost of £250, and a small vestry added soon after.

Note: From 1883 for about 2 years a school was held in the Baptist Chapel and this link provides details of events:

To Baptist school Back to top Next page