St Swithun, Bishop of Winchester, died in 826 [this might be a printing error as *862 is the actual year of death] and was buried in the churchyard [*the original burial was outside the now vanished Saxon Cathedral]. In 971, when it was decided to take his body to a shrine in the cathedral, the legend is that it was delayed by forty days rain. This has given rise to the superstition that if it rains on St Swithun’s Day, July 15th, it will rain for forty days.

A Norman door (left), with cable and zig-zag moulding, has been built into the north wall, but the east end is far more dramatic. Over the great five-light window with flowering tracery there is a triangular window. Below this are two shields, Strelley with its vertical bands, and Strelley of Woodborough, which has a cinquefoil over the bands. Sampson de Strelley was the founder of the Woodborough branch of the family. His son Richard who owned the Manor by 1336 must have been responsible for building this superb chancel between 1336 and 1345. The Woodborough Sampson is often confused with his great-nephew, Samson de Strelley, who was building Strelley church in 1356.

There are two sculptured crosses (below right) on the east and west gables of the chancel. They contain a Crucifixion and other subjects. The chancel is built of ashlar and has gabled buttresses and grotesque heads. It resembles the other ‘Decorated’ chancels in the county, which include Hawton and Sibthorpe. The south wall has many graffiti, small sundials and vertical grooves. These are said to be caused by sharpening arrows when the archery practice took place in the churchyard, but they could have been used for any other pointed instrument. The large tower is chiefly 15th century but the lower stage may have been 13th century.

Just inside the south door is a tub-shaped Norman font ornamented with crosses and zig-zags. The nave arcades are late 14th century, perpendicular. Above the piers there are carvings, chiefly of men and animals, inserted recently, of the same period. 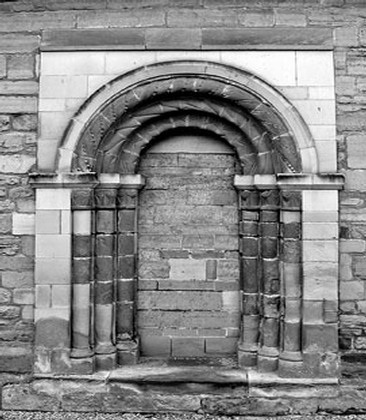 Above: The Norman doorway c.1150 situated on the north side was once the main entrance now bricked up and forming part of the church wall. Right: The Great East Window and above, the two crosses, one of which is over the gable end.

The clerestory is 15th century. The tracery in the aisle windows was added in 1891 but the great interest is that they all contain Kempe glass.Near the pulpit is the latest cross-slab in the county to William Ailvye, yeoman, died 1591. The choir stalls, pulpit and western screen were carved by Mansfield Parkyns, 1823-94, with the help of a local joiner Richard Ward. He was one of the Bunny Parkyns and spent much time in Abyssinia. He bought Woodborough Hall in 1852 and this carving was presented in 1893.

The chancel is as fine inside as outside with a lofty chancel arch and brackets bearing heads of a king and queen, on each side of the east window.

The sedilia do not look old and the piscina seems to be a mixture of a shaft of about 1250 and a 14th century niche. Opposite is an aumbry. There is 14th century glass in the side 3-light windows, including scenes from Christ’s Passion. St Margaret with a dragon and St Catherine with a wheel. There is a very good window of 1910 by Morris & Co. Notice the tablet with beautifully carved script put up by William Edge in 1770. The communion table with bulbous legs was given by John Wood, previously Recorder of Newark, as a thanks offering for the Restoration of Charles II in 1660. 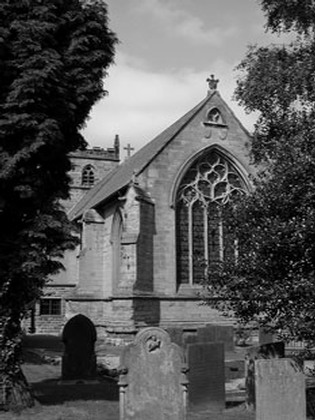