The main locations for debris, were:

Steve Derry arranged for ITV Central News to come on the 23rd May 2016 to interview eye witnesses and later with the two pilots, ITV (there was also coverage on BBC East Midlands Today) they returned again on the 26th for 8.46am to continue recording this unusual event. Children from the local school were also present as were the two pilots and several local eye witnesses. The church bells were also be rung.

The following gallery of photographs captures this happy reunion.

On the 26th May 2016 it was be the 50th anniversary of two jet Provost training jet aircraft [similar to the one shown right] colliding over Woodborough, sending debris down on to many parts of the village. It is indeed a miracle that no one on the ground was either injured or killed and both pilots parachuted to safety. Also no buildings were damaged and the photos of debris in and around the village testifies to how much fallout there was from these two planes.

The time of the collision was 8.46am and there were several people either working or going to work also children were walking to their school on Lingwood Lane. 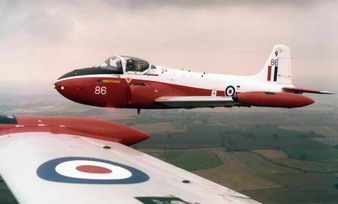 Fifty years ago today, wreckage from two planes descended on a Nottinghamshire village after they collided mid-air during an aerobatic practice session.

Pilots Mike Sedman and Tim Thorn will be reunited in Woodborough as the village looks back on the crash, which miraculously involved no injuries or damage to property.

Farmer David Rose witnessed the crash of the planes from RAF Syerston on Thursday, May 26th 1966. The now 78 year old told the Post: “I was at the farm [Manor Farm] at the centre of the village next to the Four Bells pub. I just heard these three explosions from the sky and rushed into the road – of course there wasn’t much traffic back then. Suddenly, these bits and pieces started dropping around me; nuts and bolts and bits of engine. I ducked for cover and looked out and saw this parachute coming down.

“One of the chaps landed right in front of me on the road, just missing spiked railings [by Manor Farm]. “There was a very strong wind that morning and the other man got blown away and landed across the village in a bungalow garden down Main Street, near the old Co-op.

“One of the planes cart-wheeled across the sky in flames and, during the crash, the whole village reeked of aviation fuel. The fire service was worried because of the explosive charge for an ejector seat that wasn’t used, which they thought might blow up. The wreckage was left all across the village”.

Mr Rose and other villagers, who witnessed the two Jet Provost training aircraft fall from the sky that day, were not hurt and both pilots escaped without injury.

Mr Rose was the first to take pictures. He added: ”I was lucky that I had a tiny 127 Kodak Brownie camera. The photos came out so clear. People question why we are celebrating a plane crash, but no-one was hurt”.

Today’s event, held mainly at the Nag’s Head on Main Street, will include pictures from the crash blown up to A3 size. At the same time, collections will be made for Nottingham Hospitals’ charities Saving Lives appeal for a helipad at the Queen’s Medical Centre.

Stephen Derry remembers the crash took place on his seventh birthday. Mr Derry, who turns 57 today, said: “At the time, the village was only about 400 or 500 people living here, but now there’s a couple of thousand. It is one of the biggest events in the village’s history. It’s a miracle that no-one was hurt and nothing in the village was damaged and we look forward to welcoming the pilots back safe and sound”.

Tears were shed and church bells rang out as two pilots were reunited in the quiet village where their planes collided fifty years ago.

Tim Thorn and Mike Sedman visited Woodborough yesterday, half a century after the crash between two Provost Jet trainers showered the area with debris – narrowly missing youngsters who were on their way to school.

The duo, who were based at RAF Syerston, in Flintham, near Newark, ejected from their seats after the collision at 5,000 feet with another plane. They parachuted into the village main street and, miraculously, there were no injuries or damage to property.

Mike, who was 21 at the time and had been learning how to fly for two months, said: “We haven’t been back to the village since. It has been quite an emotional experience, as the crash has always been in the back of my mind. “It’s very humbling to come back. The welcome we received was quite extraordinary. We have met people who were there at the time and children who have been learning about it at their school”.

The reunion took place at the Nag’s Head pub, in Main Street, where a flag was raised by 13 children from Woodborough Primary School.

Church bells at St Swithun’s, where there is a plaque to commemorate the crash, rang at 8.46 a.m. – the time the collision was recorded.

Mike, now 71, and living in Oxfordshire, said: “It was a life changing experience in many respects. I wouldn’t have met my wife if it wasn’t for the crash and the accident itself was a-once-in-a-lifetime moment”.

Part of the plane’s wing fell into the yard of butcher Walter Hill, a cockpit dropped into a farmer’s yard and debris fell on the village playing field.

The airmen were taken to Nottingham General Hospital but neither they nor the other pilot had serious injuries. Tim, who was 23 at the time and had been flying for four years, said: “I tried to avoid the collision but it didn’t work, so we had to eject. As soon as we pulled the handle, everything that happened next was a blur”.

The reunion was organised by Peter Bearne, of ITV Central News, and Stephen Derry, who works at the Nag’s Head. Mr Derry, who remembers the crash took place on his seventh birthday, said: “I was travelling on a bus from Lowdham and as we passed the church, we looked up in the sky and saw two planes crash. I got to the school and one of the pilots landed 10 yards in front of me with his parachute”.

Farmer David Rose, who witnessed the crash, shook hands with the pilots at the reunion. The 78 year old said: “It’s still so vivid; I heard three explosions from the sky and rushed into the road. I asked him if he was ok and drove him to his friend, who was about half a mile away. The wreckage was left all across the village”.