Woodborough Flooding - A study of the 2007 floods

Heavy and prolonged rains throughout May, June and July, but in particular June 2007, resulted in flooding affecting Woodborough and several other villages in the locality. These rains also affected other parts of Nottinghamshire. Further north, the cities of Doncaster, Sheffield and Hull were badly flooded resulting in considerable and widespread damage to property.

Heavy rain continued throughout July 2007 resulting in more widespread flooding in Oxfordshire around the upper reaches of the Thames. Further west counties and towns bordering the Rivers Severn and Avon have experienced unprecedented flooding. Flooding in Woodborough was not as damaging as in other locations, but to those people whose homes were affected that is small comfort.

To compare local rainfall in June and July 2007 with the same period last year, CalvertonCam has kindly provided the rainfall and temperature graphs shown below. A visit to their website at www.calvertoncam.co.uk/weather/ will provide more detailed graphs over a wider period of time together with a great deal of local weather past and present. Readers might like to examine graphs for post Christmas 2006 to see the patterns of rainfall prior to our summer floods.

The above June and July 2006 graphs show that very little rain fell during these two months. However, the 2007 graphs below show a completely different story, once the rains started on the 13th June 2007 there was heavy rain on most days throughout that month adding to soil saturation.

Putting local flooding into perspective, it is more a matter of luck (or bad luck), as to whether a period of prolonged and heavy rain happens in the vicinity of Woodborough resulting in local flooding.

• Main Street at the west end is 49 metres above sea level, at the Main Street midway point by the Church it is 43 metres and at the east near the Nags Head pub it is 42 metres.

• Once the dyke overflows at the west end there is a drop of 6 metres in half a mile,  the flow gathers momentum not having any points to which it can divert.

• Heavy and persistent rain on already saturated fields results in water ‘run-off’ finding its way into the Westfield dyke and Main Street dyke, then running down the length of Main Street and back into gullies and dykes at the eastern end of the village.

• Water from Main Street affected the first housing estate, which is at Pinfold Close, only very slightly. The first properties in the Close had their garages flooded but not the houses themselves. Flood water badly affected two cottages on Main Street numbers 122 and 124 at which point there is an open dyke going around these properties. There was further flooding to several houses and bungalows opposite the Post Office and the Post Office itself being the only building on the north side of Main Street to be flooded. At Smalls Croft a similar situation to that at Pinfold Close, the first few houses into Smalls Croft were slightly affected but four houses on the corner with Main Street were all flooded. Three cottage properties fronting Main Street were also flooded quite badly. Just past these, three more cottages at right angles to Main Street share a drive that drops away from Main Street. At this point the water ceases to flow along Main Street but turns down a shared drive and turbulently flows back towards the dyke at its far end behind the Nags Head pub.

• A close study of the Environment Agency's detailed map of Woodborough (see below) created December 2004, predicts patterns of flooding, this now seems on the evidence of the recent and most severe floods, to be inaccurate. The flood water flow continues predominantly down to the east end of Main Street rather than ingressing to any great extent through the two housing estates of Smalls Croft and Pinfold Close. The EA maps below suggest the housing estates would be flooded and the eastern end of Main Street would not. Whereas the east end of Main Street did flood and the estates by and large did not. The first map below, which is the one provided by the Environment Agency in 2004, and is similar to the one on their website, shows the estimated flood risk areas for Woodborough. The actual flooding in June 2007 was by and large contained along the boundaries of Main Street. The predicted flood areas are shaded in light blue.

It is thought no more than 15 houses suffered internal flooding and a few more properties only suffered flooded gardens. All of the properties are situated between Pinfold Close and the bus shelter opposite Ploughman Avenue. These would be on the south side of Main Street and at the eastern end on the village; this turns out to be about .03% of the total number of properties in Woodborough. Some of these properties were flooded up to four times. But one house flooded once is one too many.

Quote from the EA’s website. “Note that the Flood Map is only intended as a guide - it is not intended to be accurate at individual property level.” For more information, go to: www.environment-agency.gov.uk and use the links to check out the points you have concerns about.

The second map shows the actual areas (hatched in red) affected by flooding. To the best of our knowledge this is reasonably correct and is arrived at by observations made at the time and from photographs taken during the period of flood.

Prolonged and heavy rain results in run-off from surrounding fields, the water level will continue to rise for a period of about 6 hours or more following the cessation of rain. Then the levels recede slowly until a point is reached that the gullies and dykes take over. The final stages of surface water drainage can disappear in 15 to 30 minutes leaving widespread silt on roadways, footpaths, driveways and gardens. Surface water will drain away completely following cessation of localised rain.

According to minutes of the Woodborough Parish Council meeting in March 2007 the following is recorded, “the Environment Agency had reported that they were monitoring the ground saturation level and that it was now at saturation point; this was an initial danger sign that flash floods could occur. The clerk was asked to write to Andrew Pendleton asking him to write to the County stressing the importance of emptying the roadside gullies in Woodborough asking them to increase the frequency”. It is not known whether this letter produced any action by way of clearing or flushing.

Flooding took place in the early hours of Wednesday 20th June 2007, when there was a violent thunderstorm followed by torrential rain with just under 2” of rain falling in 2 hours. It is believed only four houses and several gardens were flooded all on the south side of the eastern end of Main Street when the western end of the Main Street dyke overflowed.

At about midday on Friday 22nd June there was again very heavy rain over the hills to the south west of the village. This caused ‘run-off’ from the already rain soaked fields running down Westfields, Bank Hill and Foxwood Lane. The water courses down to and along Main Street couldn't cope with the sudden flow of water and Main Street became a river along its entire length of one mile and the entire width covering most pavements. Many more properties on the south side were flooded, probably up to 16 between numbers 110 and 162. At about 2pm the flood waters peaked then a gradual fall in depth occurred around 3pm. By 4pm most of the water had drained away into the gullies and drains. A covering of silt that had washed down from the surrounding fields was left on the pavements and roadways mostly along Main Street.

Once the Westfield dyke reaches capacity it overflows at point A before reaching the Main Street Dyke at point B. Main Street dyke then also overflows at this point causing flood water to surge the length of Main Street until point C a private driveway (opposite Ploughman Avenue), it then flows down this driveway to the dyke behind the Nags Head pub.

Below: Pathfinder map 813 courtesy of OS. 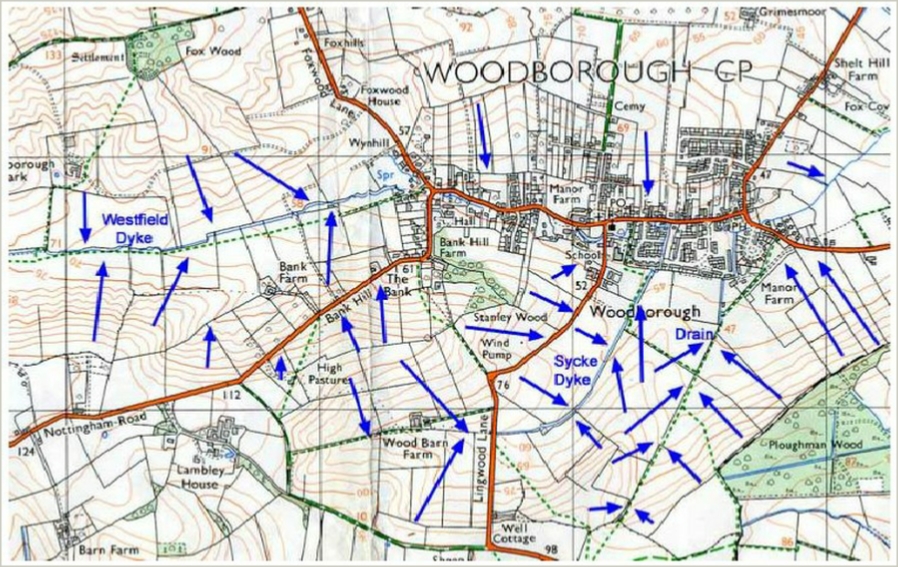 A third flood of greater impact occurred following heavy rain in early hours of Monday 25th June 2007, residents awaking to find Main Street in considerable flood. The levels continued to rise throughout the morning, peaking slightly higher than the previous Friday. Early afternoon saw the levels falling away and by mid-afternoon the road was clear again.

On 26th July 2007 there was again torrential and prolonged rain throughout the day over Woodborough and the wider Nottingham area, the Woodborough dyke again overflowed at about 4pm flowing down the whole length of Main Street and causing flooding to many of the properties that had previously been flooded in June.

There are two drainage pipes running side by side under the pavement along Main Street between numbers 110 and 162. One of these pipes has been blocked for some considerable time and efforts to get the Environment Agency to investigate and clear the blockage have been unsuccessful. However, on 22nd June 2007 a manhole cover on the corner of Main Street and Smalls Croft was forced up due to pressure of water beneath. Once the water level had dropped it allowed local residents to investigate the drain for themselves. A large amount of debris was removed from the hole and drainage water once again flowed freely through both pipes. It is not suggested that this particular blockage alone caused the flooding in the eastern part of Main Street; it is just one of many contributing factors that need investigating.

Throughout May, June and July 2007 rainfall had been unprecedented, with amounts normally associated with winter rainfall. Older residents cannot ever remember flooding to this extent.

The Environment Agency notified residents by letter on 30th July 2007 that contractors would undertake from 31st July de-silting of the open beck on Main Street and Lowdham Lane. Other de-silting work would also take place on the School playing fields and where the brook joins the Main Street dyke.

CCTV works will be carried out on all culverts that run through the village to assess whether they are blocked or need repairing. Once surveyed the EA can speak to the relevant owners to make sure the works are carried out. These works are to allow the watercourses to carry a higher flow of water in times of bad weather. Their letter states that they do not expect these actions to prevent flooding in times of extreme weather conditions.

In conclusion: The weather climates are changeable and are complicated and difficult to predict. Flash flooding in the UK now seems to be the norm with tremendous downpours in different parts of the country at different times. Locally, heavy rainfall over a prolonged period could result in flooding of the dyke, with overflow onto and along Main Street but this does not happen very often. When nature takes control the water flows from the fields and water levels in the village dykes rise dangerously high, but only exceptional and prolonged periods of rain will cause this overflow onto Main Street.

Photographs: We have in excess of 170 photographs of the village in flood; some of these photographs have been placed into six sections on another page. These sections start at the west end following the direction of the dyke as it flows along the edge of Main Street to eastern end of the village.