The extent of woodland in Woodborough in 1609 can be seen in Bank’s map of that year. The main area of woodland in the village was to the west of the West Field and belonged to Strelley of the Upper Hall. At the time it included Woodborough Wood, Stoup Hill Coppice, Mardales, Fox Wood and the Riddings. The latter appears to have been woodland which had been felled and would have been called a ‘waste’ at the time.

The large area of woodland and coppice covered about 530 acres. The other area was on the south side of Bank Hill reaching as far as Agram Wells on Lingwood Lane. It belonged to Mr John Wood of the Middle Hall (the present Manor). It included Sowe Wood or Sowoode and Stanley Wood, which was the coppice and was about 56 acres in extent. All woodlands were on rising ground.

It appears that these two areas of woodland, totalling about 586 acres, remained for about three centuries until the time of the Inclosure Award in 1798, although by then all of the woodland was being coppiced.

Since Inclosure most of the woodland has disappeared, due probably, to the increased use of brick for building purposes starting in the village in the early 18th century, and also for the demand for agricultural produce due to the Industrial Revolution and the population growth of Nottingham in the early 19th century. By the beginning of the 20th century, with hand framework knitting then in rapid decline, the village was mainly agricultural – farming and market gardening – and only a very small area of woodland was left. In the early 21st century probably less than ten acres of poor woodland remain within the parish boundary lying roughly between Bank Hill, Nottingham Road, Dorket Head, Georges Lane and Spindle Lane. 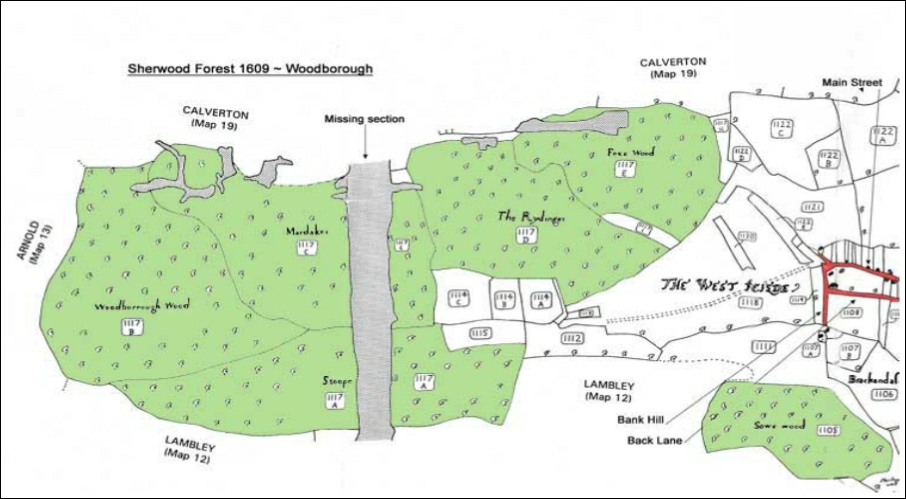 This map only covers the western part of the Woodborough Parish, however, there are no woods or coppices indicated

in the centre or eastern part of the village or parish  The areas shaded green show the location of woodland in 1609.

Woodborough nestles in a shallow fertile valley and is surrounded on three sides by rolling wooded hills; the highest being 125 metres above sea level, the village itself is 35 metres. The largest of our local woodlands is Ploughman Wood which probably formed the southern part of the much larger Sherwood Forest and which is entirely in the Lowdham Parish.

The decline of the once huge Sherwood Forest has taken centuries and what we are left with today are scattered pockets of woodland. Some of our woodlands have been left to nature and are largely untouched, others have been managed. Following the recent scourge of Dutch Elm disease, where necessary they have been replanted,

Now that there is a much greater interest in preservation it is unlikely that these ancient woodlands will be lost or allowed to decline further. Careful management by local farmers and organisations such as the Wildlife Trusts will preserve these natural habitats for the animals, birds and fauna and flora for future generations to enjoy their beauty.

Woodlands are very much part of the English landscape for which this country is renowned throughout the world. We are fortunate to have three fine examples on our doorstep.