Creation of the Private Road land

The following information has been compiled by Paul Reed by using his property title deeds and formed a talk given to the Woodborough Local History Group in September 2021.

In 1854 a sale of pasture land took place. A total of 4 different absentee landowners put together 2 parcels of land, named the Row Closes. The first Row Close of 12 acres, which we now know as the Grimesmoor north of the village cemetery and the second Row Close, the latter area only being of relevance to this study. The following plan indicates that this land was adjacent to Roe Lane with Glebe land to the north, now the cemetery. 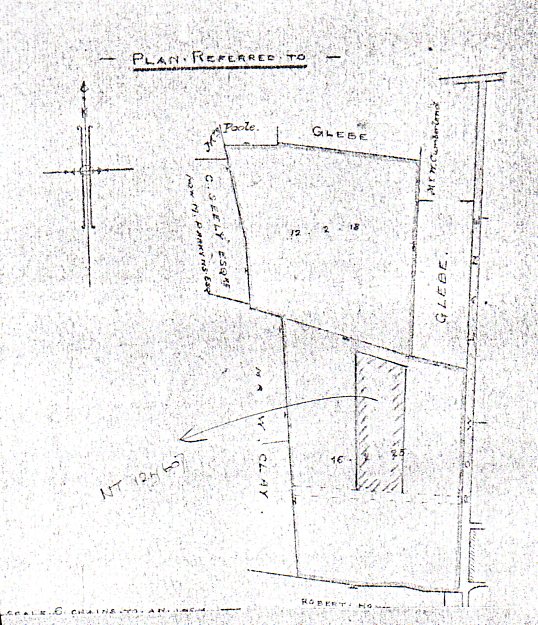 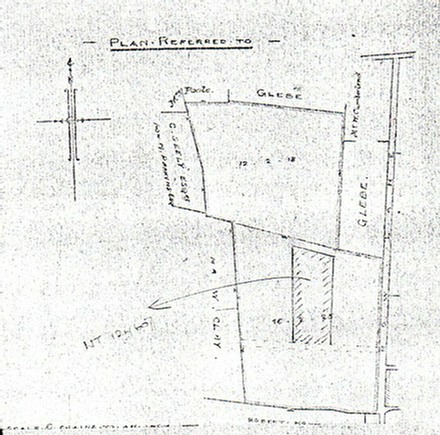 It is clear that subsequent to the allocation of land in the Enclosure Award of 1795-8 much change of ownership was occurring. The 4 vendors were as follows:

The 16 acre 2nd Row Close, tenanted by Mrs Fanny Pinder was sold for £1,800 to Mr Thomas Huskinson. Here is seen a modern photograph of the land which adjoins Roe Lane to the east, the village cemetery to the north and its southern border is now Broad Close.

The title deeds indicate that the conveyance was made subject to a covenant that the purchaser shall pay £2 every year to the Minister of Woodborough for the poor widows and the singers of the parish church. 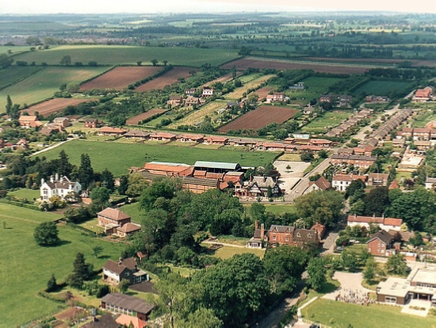 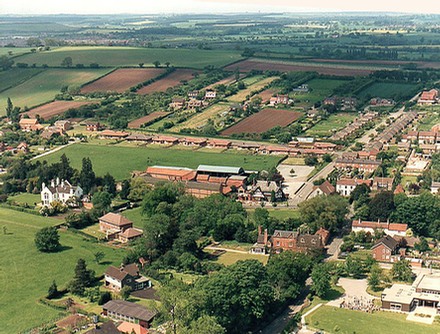 The Huskinsons trace their family back to Queen Elizabeth’s time, originally in Colston Bassett and Cropwell Bishop. In the early 1800’s William Huskinson, resident in Gunthorpe was a Trent Navigation carrier and wharfinger, carting coal to surrounding villages and bringing back agricultural produce to Gunthorpe. He had 10 children and Thomas, his youngest son, shown below, born in Gunthorpe in 1817 and married in March 1838 to Mary Lambe Bousfield at St Nicholas Church would purchase 2nd Row Close in Woodborough.

Above right: The centre of Woodborough, Private Road shown in the top third of this aerial photo. 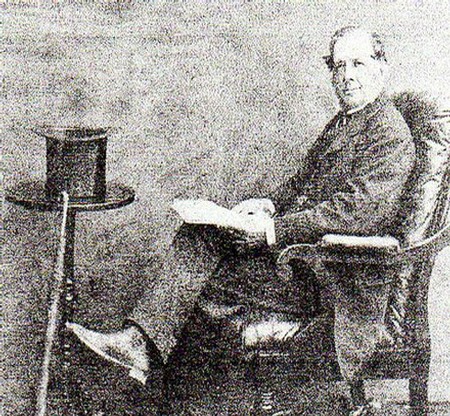 Thomas initially set up home in Bulcote and his only surviving son out of five born, William Lambe Huskinson was born in 1839. The 1841 Census lists Thomas, now 24, as a land surveyor and this skill would lead him to become a Land Agent which, at the time, was a new profession. He soon became well known by recommendation and quickly was handling land deals not only in this area but countrywide. Indeed, by 1855 he is involved with the Paris Exhibition and his clientele was the aristocracy and landed gentry.

Two of the original Woodborough vendors, Francis Hall and John Taylor, had both been Nottinghamshire High Sheriffs so it is understandable that Thomas should hear of the proposed sale by moving in the right circles. He was now very wealthy and would buy land for himself when he judged the price was right. By 1851 he and his family had moved to Epperstone and in the following Census of that year you’ll see he has 15 labourers, 2 servants and 440 acres.

In 1859 Thomas purchased Epperstone Manor because his only son William had produced 10 offspring, all sons and Thomas substantially extends and modernises the Manor so that William, his wife and large family, can live there with him.

Below: the 1861 Census which shows Thomas Huskinson entry on the top line.

By 1861 the Census informs us Thomas now has 3 servants, 30 labourers and 25 boys on his 895 acres. This acreage tells us that he was buying large tracts of land and he makes his first appearance in White’s Nottinghamshire Directory, for 1864 as one of Woodborough’s largest landowners. He becomes listed in Burkes Peerage in 1873 in the Landed Gentry Section. The definition of this is someone not expected to work but living entirely off the rental income of his tenanted estates. Thomas dies on 31st January 1887 aged 70 and his personal estate, proved in his will, is worth £18,637. His wife, Mary, would die 6 years later aged 74. We now turn to his son William, also a Land Agent.

At the time of his father’s death there was a slump in agriculture and as a result William is declared bankrupt. A succession of poor harvests, due to bad weather when crops failed, was probably connected with the gigantic eruption of Krakatoa volcano in Japan. This did not affect the USA where prairies were in full production and were undercutting British farmers by 50 per cent and English farming was devastated. William sold his Epperstone estate in 1893 and moved to humble accommodation in the village. Prior to this in 1889, 2 years after inheriting from his father, William is in desperate need of money and he mortgages the Woodborough 2nd Row Close for £2,000. William’s eldest son, Thomas William Huskinson (photo below left), also a land agent, now becomes the family’s decision maker.

With no inheritance possible, Thomas marries, hopefully for love, but certainly for money at St George’s Church, Hanover Square, London. His wife Mary Margaret Champneys, known as Polly, is the daughter of the late Epperstone parish rector, Maximillian Champneys and it was said Polly, who inherited very well, could trace her descent from Edward I. With her own finances, kept perhaps at arm’s length from her hard-up father-in-law and her husband, releases the £2,000

Polly was unwilling to remain a landowner and in a Woodborough Parish Council minute dated 3rd December 1903, she offers the 16 acre 2nd Row Close to the village for use as allotments for an undisclosed amount. The Council appointed a deputation to see if they could obtain better terms but they were unsuccessful and decided not to go ahead. In 1904, which is the year when father-in-law William dies, Polly terminates the tenancy and decides to sell, cleverly realising she would do better by selling individual strips of land and the area is divided into 8 parcels. mortgage and, in addition, pays her father-in-law £800 to become the 2nd owner Row close, currently being tenanted by Messrs Middup and Poole. So Polly’s parents-in-law were to see out their days, first in cottage accommodation, and later taking back from tenants the Old House or the Lower House in Epperstone, as they knew it. This view is not normally visible and it is the back elevation taken from the roadside usually seen. 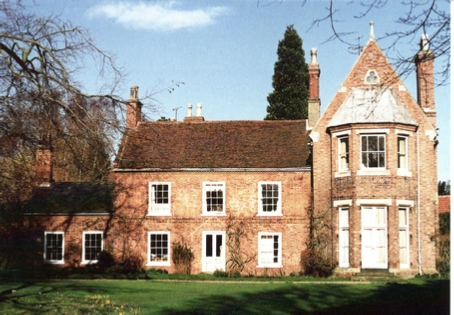 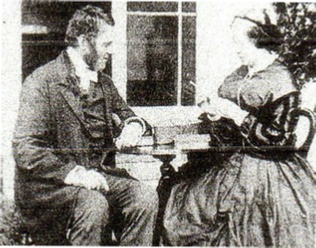 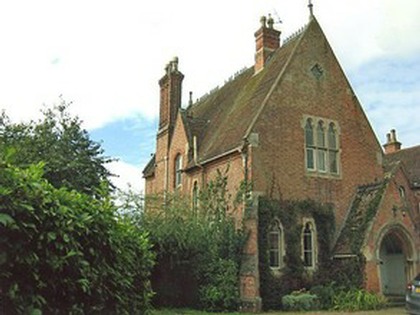 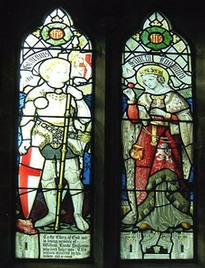 Left: Epperstone Cemetery, the headstones for the Huskinson family are the first 3 on the back row.

Above centre & right close ups of the three headstones.

An important proviso in each of the 8 sale conveyances essential to each purchase is worded as follows: “A right of carriage or footway over, along and upon the road or way not exceeding 25 feet in width between the said piece of land thereby conveyed and Row Lane, for the Purchaser, his heirs and assignees and his and their tenants, servants, work people and all others authorised by him or them”. Without this concession the landowners would be unable to access their own land. Title deeds disclose that £125 is paid for a 2 acre plot.

Above: The plan of all the plots

The Census in 1911 (see three below) was a new departure as, unlike the previous 70 years when the Enumerator wrote down the details of each household himself, these sheets were distributed to be completed by the occupants themselves and, what we find for the first time is the name of Private Road appearing. It will be noted on all three Census returns that each of the property owners derived their livelihood, two as framework knitters and the other as an accountant, and not able to live entirely from their small holdings. 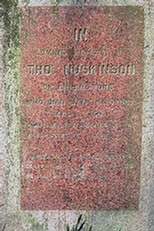 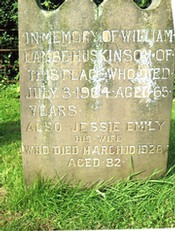 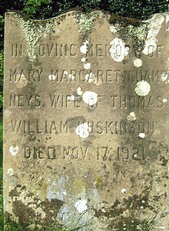 Back in 1872 Thomas had purchased this to see out his remaining years. The Huskinsons had been the most prominent family in Epperstone for 90 years although there remains very little of their influence. In Epperstone Church there is a window to William erected by his 10 sons and also a small brass plate to Thomas but otherwise their burial plots, without statuary or monuments are modestly tucked away in a corner of Epperstone Church graveyard. (See below). 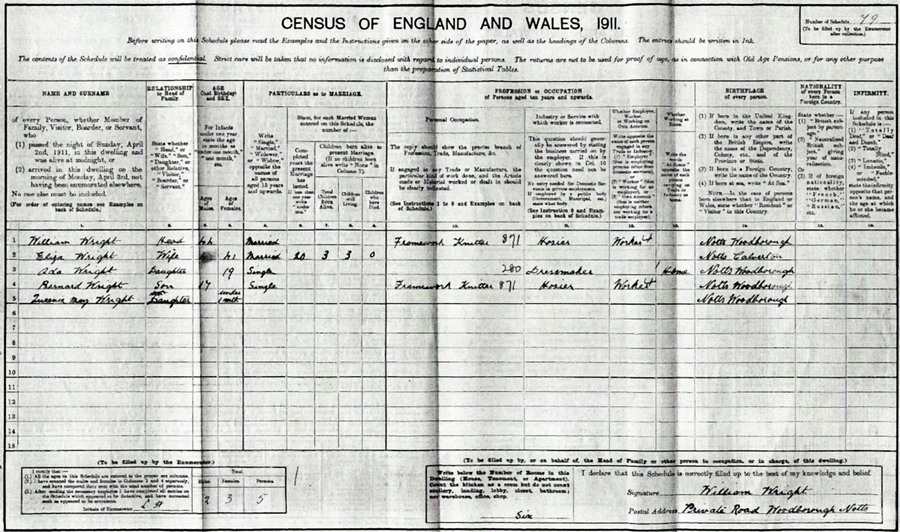 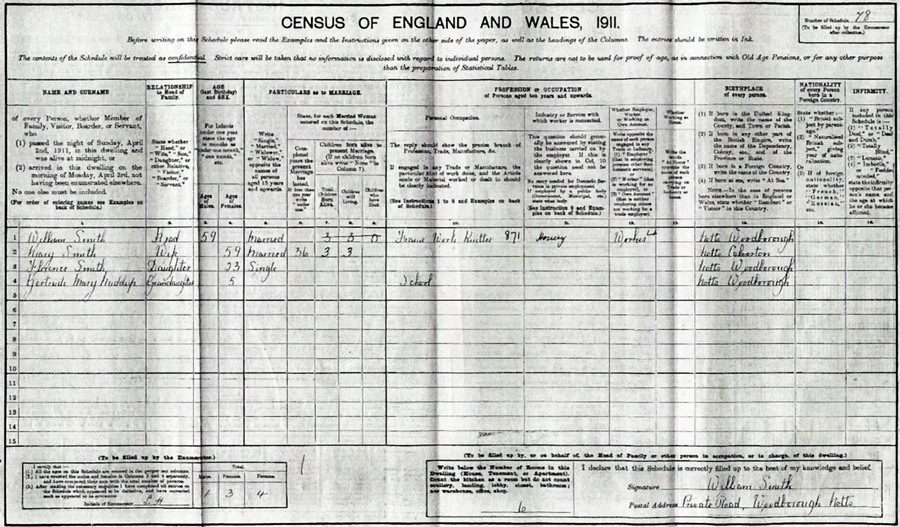 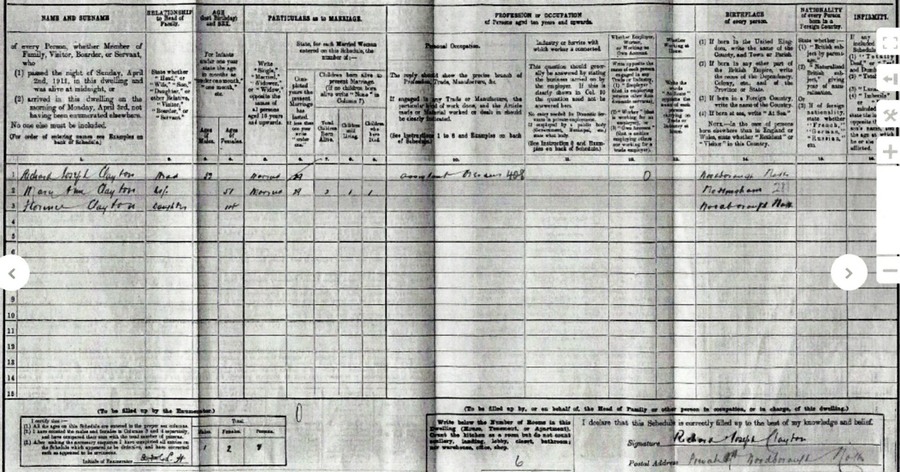 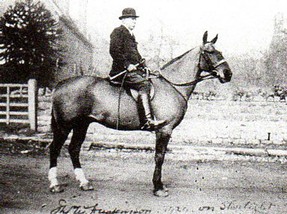 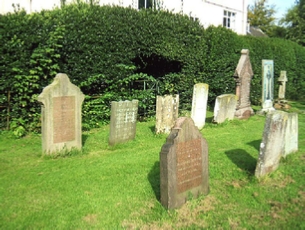 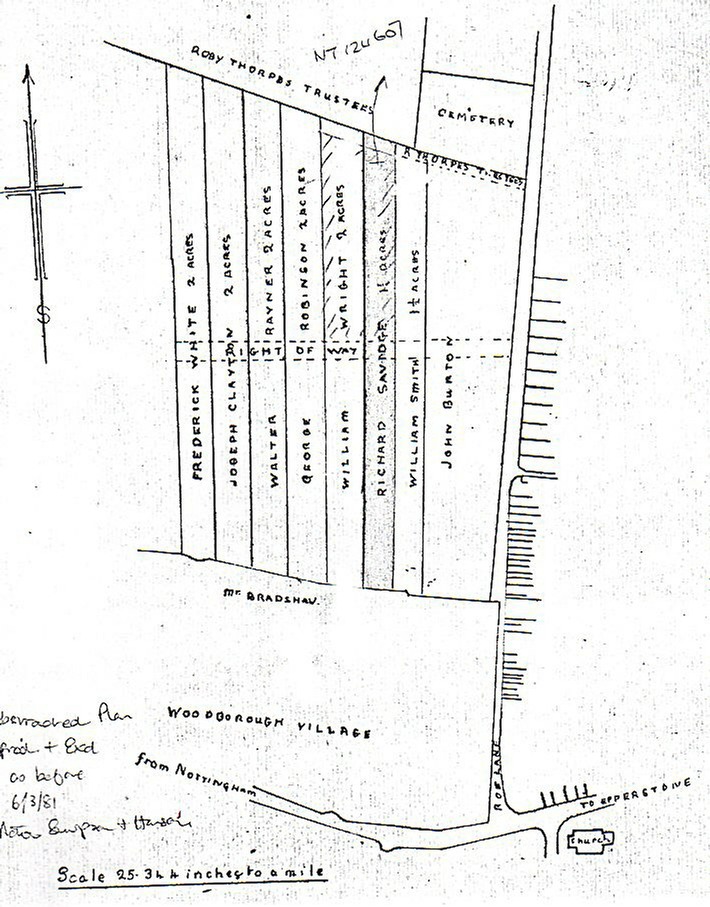 Three of the plot owners built their own homes during 1908 and here we have an undated photograph showing these 3 houses in splendid isolation. Finally we have a photograph of one of the plot holders, Vernon Savidge.

Below right: Vernon Savidge on the left, taken on Roe Lane but revealing, in the

background evidence that in earlier times Private Road had a gated entrance. 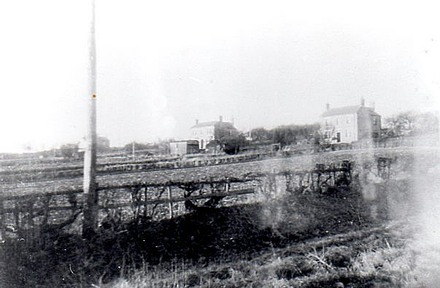