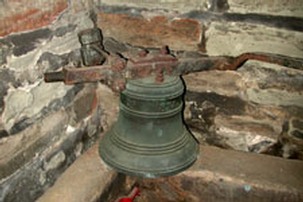 From 1969, and until 1985, the bell was housed in the Church belfry, the School bell ringing tradition changed to being tolled towards the end of the school year in July. A School Leavers' service was held in St Swithun's Church.

The School bell was renovated in 2002 and re-hung in the Church belfry, the tradition of tolling the bell at the end of a school year was recommenced in July 2002. 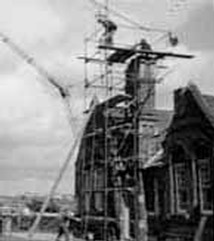 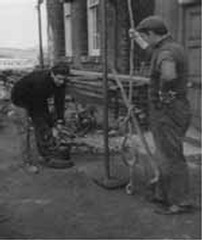 It is probable that the tradition of ringing the school bell ceased around 1968 or 1969. The bell was hung in the bellcote tower above the school. When the school relocated to the present new school building in 1968, the bell was removed and the bellcote taken down. The bell itself was then housed in the Church belfry until 1985.

During the period up to 1950 the bell was tolled for five times at 8.55am, usually by a bell monitor, to act as a warning that school time approached. It would be tolled again, twenty-two times at 9.00am., by which time pupils were expected to be in the playground in lines ready to proceed to their classrooms. For the afternoon session, the bell would toll five times at 1.25pm and at 1.30pm., for twenty-two times.

Below right: The school bell 'resting' before being re-hung in the Church belfry in 2002 following renovation of  both the bell and church tower.