THE PEDIGREE OF LAYCOCK

George Lacock, who bought Woodborough Hall, was the grandson of Thomas Lacock, who possessed lands in Stourton, Notts, and served King Henry VIII in his wars in France, and the son of Leonard Lacock of Lincoln, who married Margaret, daughter of Thomas Jenyson of Marneham, Notts, and was buried "in the Chauncell of the Church of S. Mark's at Lincoln." George Lacock himself owned property at Burton, Notts. in 1614, and in Nottingham town in 1637 and was clarke of the peace of the said County; he married Alice, daughter of Bartholomew Widowson of Lowdham. Thoroton says that Strelley Bold, son of John Bold, who died 1628. sold Woodborough to George Lacock. As Thoroton wrote in 1677 it is evident that the sale took place during the Wars of Charles I or under the Commonwealth. About this time, also the property of the Strelleys of Strelley passed to the Edge family. We may therefore reasonably conjecture that both branches of the family were Royalists and were so much impoverished by the wars that they either sold their estates or lost them by foreclosure of Mortgagees. In that case the Edges and Laycocks, Nottingham solicitors, were probably on the Parliament side. George Lacock left three sons, Matthew, 'Maister in Arts'; Edmund 'Bachelor of Divinity,' and Philip, who succeeded him.

Philip Lacock was born in 1600 and was Councillor at Law and of the Inner Temple. He is supposed to have been the third recorder of Newark in 1654 ¹, but when elected does not appear. Thoroton, writing in 1677 says that "Philip Lacock pulled down the old house, wherein was the coat of Strelley, with a cinquefoyle voided Gules in the midst of several windows, and hath built another which his son, Charles Lacock, now enjoys with his mother, who is Mary, sister of William Cartwright of Ossington, and likewise of Frances, the wife of William Strelley, son and heir of the said Christopher Strelley by a second wife, after he had disposed of his inheritance, as before is said." This is an interesting entry, as Dr. Thoroton visited Woodborough at that time. It tells us that Philip Lacock and William Strelley of Arnold, who would have inherited Woodborough if his father had not settled Woodborough on his nephew, John Bold, before he married his second wife Elizabeth Wigley, married two sisters, Mary and Frances Cartwright, and that the present hall was built by Philip Lacock in the reign of Charles II. The arms of Lacock, "Argent a dexter gauntlet sable garnished or" are still (1896) in the carved oak chimney piece in the Dining room. The house was originally of two floors only, and had a gabled and tiled roof similar to that of the Hall Farm House. Philip Lacock died in 1668. He had three children, George, who died at the age of three; a daughter, Mary, who died unmarried; and Charles, who succeeded him. He and his wife were buried in the Chancel of Woodborough Church under brasses which, previous to the Restoration of 1891, were in the centre of the Sanctuary instead of at the sides.

Brass. "Mary Cartwright, daughter to Fulc Cartwright of Ossington, Esqre, in the County of Nottingham, and wife to Philip Lacock of the Inner Temple, London and since of Woodborough, Esqre, in the same County, died the 24th day of January, 1692."

Charles Lacock gave the Tenor Bell or perhaps had an older bell re-cast, as the inscription shows— "DONUS SANCTIS SWITHINIS CAROLUS LAWCOCK Esq., 1680." This Bell cracked in 1896 and was re-cast by Messrs. Taylor, of Loughborough, while the upper part of the Tower was being re-built. He died, in 1683, as the Chancel slab shows— "Carolus Lacock armiger obiit 7 die Februarii Anno Dmi 1683."

Philip Lacock his son (or brother) married Margrett Wright of Edingley and had six children, four of whom, Charles, Philip, Robert and Margaret, died unmarried; Mary, who married William Bainbridge and succeeded him, and Ann, who married John. Story. Several slabs and brasses in the Chancel commemorate them.

Brass. "In memory of William Lacock, Esqre, Lord of the freehold Manor in Woodborough." He married Margrett, the daughter of William Wright of Edingley, gent, by whom he had 4 sons and 4 daughters." Only one daughter survived him, viz : Mary, now wife of William Bainbrigge of Lockington, in the County of Leicester, Esqre, who having lived 78 years a pious life here on earth, yielded up his soul into the regions of immortality on the 25th day of Feb., 1720.

Mary Bainbridge. née Lacock in 1693, married Mr. William Bainbridge in 1711 and had eleven children, who all died in infancy, except Elizabeth, who was born in 1716.

Brass. "In memory of Philip, Ann, Dorothy and Charles Bainbridge  sons and daughters of Wm. Bainbrigge, Esqre, by Mary his wife, and daughter of Philip Lacock, Esqre. All died very young."

Elizabeth Bainbridge. b. 1716, never married and died in 1798 at the time of the Enclosure of Woodborough, as is stated in the award. Throsby, the Editor of Thoroton's Notts, visited Woodborough during her life in 1797 and adds the following note :-
"Lordship is open field, chiefly in possession of Mrs. Bainbrigge and a Mr. Edge, both inhabitants of this village. The village consists of 100 dwellings or upwards. The Church is dedicated to St. Swithin, has a Nave and two side aisles and a tower with 4 bells. The Chancel windows were once rich with painted glass, but now are so filthy, broken, and patched, that little can be made out to please by description. A brass in the Chancel says: Hic jacet Philippus Lacock de Woodborough et Interiore Templo Londineusi armiger, etc. An: Aet LXVIII. Apr IX. MDCLXVIII. William Bainbridge, Esqre, died in 1737, in the 16th year of his age. Philip Lacock died in 1707 aged 21. Charles Lacock, Esqre, died in 1688. Here the water, stock and stalls are very perfect. This is in the gift of Southwell Minster. Incumbent — [no name] Vicar, King's Books, £4 11. 5½d. Clear yearly value £13 0s. 0d.  Syn and prox null."

Of Miss Elizabeth Bainbridge, Throsby gives the following description; "The lady lives in an old Hall house, built in plain style. She is the most extraordinary character for benevolence that I have ever heard of: it will be an agreeable task for her biographer to enumerate her extensive charities when the world shall be deprived by her death of those beneficent acts which are now the theme and praise of every social add good mind; to attempt here to particularize those merciful and pious deeds which have made her name dear to all who know her, would be a task of difficulty and might offend the serenity of that happy disposition which everyone who knows would surely study not to offend. May her years be long Happiness she must possess in a superlative degree: may her death be like the setting sun in a bright and calm evening, when his rays on leaving us form a splendid and magnificent scene. Her character of benevolence is confirmed by later tradition, which says that she gave £1000 towards the formation of the Nottingham General hospital. It is possible that she gave the Poor houses and gardens and the Foxwood Gardens and a field on the Moor, but the Enclosure award implies that this property was bought by or awarded to the Overseers of the Poor for the employment and housing of paupers under the old Poor Law. She left each of the servants a legacy of £30. Her 'Fromety' Feasts at sheep shearing are still a tradition. The people were invited to bring wooden spoons, and four ate from each bowl, while the old lady watched with delight from one of the windows. She lived a plain life, was known by her old red cloak, and delighted to make people happy. A pair of her shoes, made of a sort of rough white kid with high heels and pointed toes and fastened in front with a silver buckle, are now in the possession of Miss Lucy Orme. The good lady never had a biographer, nor does any monument mark the place where she rests. Her burial is not entered in the Parish Register, which at this time was very ill-written. Perhaps she died and was buried elsewhere. At her death Woodborough Hall passed to her cousin, the Rev. Philip Story, of Lockington Hall, second son of her aunt, Ann Lacock, who married Mr. John Story. 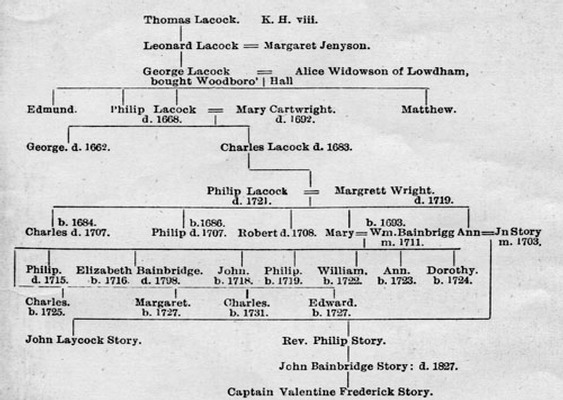