Late in 2011, I received a telephone call informing me that I had been chosen to carry the Olympic Torch in the relay around the UK prior to the Olympic Games in 2012 in London. I thought that this was a hoax call and almost put down the telephone. The caller then went on to say that I had been nominated by my son, Jonathan, because of the voluntary and extra-curricular work I had undertaken as a P.E. Teacher organising events at local and regional level plus the work that I did in my community of Woodborough over many years. Apparently, Jonathan had said that he felt that I was undervalued and deserved some recognition for my efforts on behalf of so many people.

As a teacher of Physical Education I had coached several of my pupils up to international level in various sports, organised inter-county sports tournaments, been a team manager for county teams in national events, organised and run teacher training courses in various sports for County schools and National Sports Bodies and acted as an examiner for National awards.

Within the village of Woodborough, I had led a team to raise funds and organise the Annual Village Feast Sports day for some 28 years. I was heavily involved with our village Church in the maintenance of the Church and churchyard. As a Trustee of the Woodborough Institute, I was involved on a daily basis in the maintenance of the building and the running of village activities, as well as regular fund raising to ensure that this important community building was kept financially viable. I had chaired the Woodborough Horticultural Society for some years as well as chairing a village committee which organised a fortnight of activities to celebrate the Millennium.

The caller told me that I was to tell only immediate family members about my selection as a Torch Bearer and to wait for an official Launch event in early 2012. In March 2012 I was invited to Nottingham Castle for the official announcement of the Olympic Torch Bearers in the local area. Several other selected people were present along with the press, photographers, local radio and television. I learned that I was to carry the torch on the last stage of its journey through Nottinghamshire on the 28th June.

I was so excited when my official Olympic uniform arrived and got even more excited as the big day approached. I reported to the reception centre in Newark on a thundery, rainy day for the briefing and official photographs before boarding the official coach along with the other torch carriers. Our torches were in a rack at the front of the bus which transported us to a flooded Kelham to await the arrival of the Olympic Flame from its last event at Mansfield. Everyone on the coach was so excited to see the huge crowds already along the route and waiting at Kelham. They were all cheering our arrival and waving flags and umbrellas. We received a radio message to the coach saying that the thunder and heavy rain had caused the Mansfield leg of the relay to be postponed mid way through the session for some 15 minutes or so.

Everyone on the bus was so excited at what was to come and the tension mounted when we were informed that the torch convoy was a few minutes away. The first torch bearer got off the bus with their torch and we were suddenly aware of police outriders and flashing blue lights approaching. The Olympic Flame was transferred from a miner’s lamp, in which it had been carried from Mansfield, to the first Newark Torch bearer. The coach then proceeded to drive towards Newark dropping off each 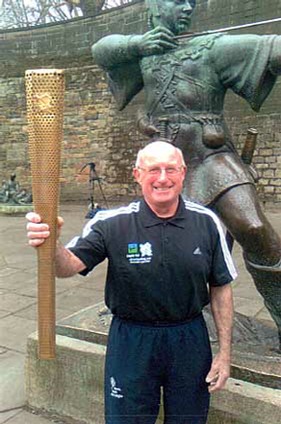 torch carrier at their allotted locations. There were crowds of people lining the route waving flags and umbrellas. When we got to Newark the coach had great difficulty negotiating its way through the cheering masses as they realised that we were the torch bearers. It was tremendously exciting to see so many people waiting for the Olympic Flame. As I was to be the final carrier, I saw the whole route and all of my colleagues leave the coach with their torches, always to cheering and applause. When it came to my turn, I was met by a policeman who stayed with me and informed me that whatever happened I was not to let go of the torch. Apparently, there had been earlier occurrences where spectators had attempted to steal a torch from the carrier.

Thankfully the rain had stopped and I found myself surrounded by a great crowd of people. A young boy shouted “Mr. Can I have a photo with you?” The policeman said that it would be alright but I was to make sure I kept a firm hold on the torch. Suddenly, the requests for photographs came thick and fast and for some time I was happy to oblige. Left: En route 28th June 2012 with support vehicles following. 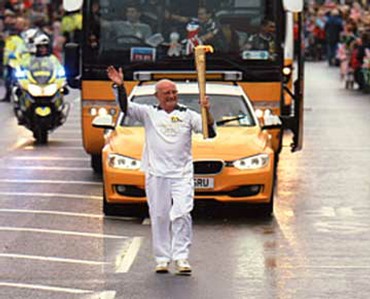 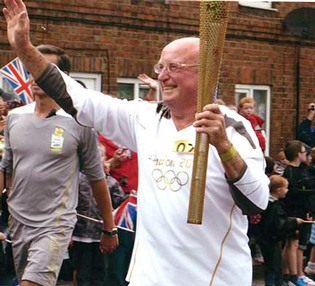 After about 15 minutes we began to hear the sound of the approaching cavalcade of police outriders and official vehicles accompanying the incoming torchbearer who was flanked by four police officers to guard the torch - there had been earlier instances where there had been attempts to steal a torch. The Olympic Flame was passed on to my torch and I was on my way. My section was from John Hunt Primary School in Newark to Balderton. As I was the final torchbearer on this stage of its journey before it was transported to the next stage at Grantham, I had been asked if I would be willing to undertake a longer distance than usual. You can imagine how readily I had agreed to this request.

I became quite emotional as I travelled along through the huge crowds of cheering, flag- waving people lining the entire route. It was so exciting to be the centre of attention. I spotted lots of people from Woodborough amongst the crowds as they shouted out to me. At the end of my stint, the flame was passed from my torch into a miner’s lamp for its transportation to the next stage at Grantham. The team coach arrived to pick me up and the other 12 torchbearers on board cheered and clapped me back on to the coach and again the tears flowed.

As we journeyed back to the reception base the huge downpour returned. We were debriefed and waited to receive our torches which had had the gas cylinders removed to decommission them. Right: David en route 28th June 2012.

Following the day, I received requests to take the torch to various functions for people to handle the torch and for me to share with them my experience of the day. I visited schools as far away as Scunthorpe, playgroups and various community events.

Everywhere I went there was great excitement and everyone wanted to hold the torch for photographs. Along with other torchbearers, I was invited to take the torch to special sports presentations at Gedling Borough and Newark Council Offices.

This was a once-in-a-lifetime experience and I felt so honoured to be a part of it. I will treasure the memory for the rest of my days.

Above: Launch at Nottingham Castle 2012