Samuel was born in 1895, the fourth child of Edwin and Harriet Spencer. His elder siblings were Maud, John and Hannah and the younger ones Fred, Edith and Edwin. He was born in Mapperley and the family moved to Woodborough in about 1899 and lived in Dark Lane. His father’s occupation is listed in 1901 as Half Hose Maker and Gardener. The 1911 census shows them living on Shelt Hill and Edwin is now a self-employed Market Gardener. At this time Samuel was a farm servant at Calverton and living with John and Phoebe Staples.

Samuel enlisted in 1915 at Nottingham as a Private in the South Nottinghamshire Hussars and served in Egypt, subsequently transferring to the Corps of Hussars and reaching the rank of Sergeant. He is the only Woodborough man to have died at sea during this war. He is remembered on the Chatby Memorial at Alexandria in Egypt. 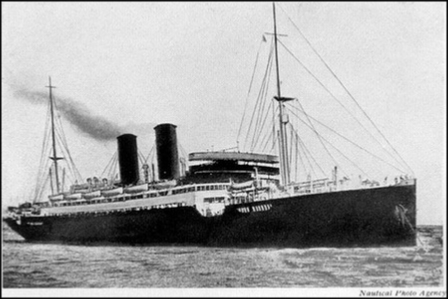 Photo of the Leasowe Castle © to the Merseyside Maritime Museum

The Hussars had been fighting in the Middle East and they were returning to France where they were to be re-formed as a machine gun company. Their new title was to be the South Notts Machine Gun Battalion. They were sent to Alexandria, Egypt and had received orders to embark on a transport ship called the "Leasowe Castle" on 23th May 1918. On 27th May, the ship was struck by a torpedo with devastating results. A very detailed account of the fateful journey may be read in the historical records of the South Notts Hussars Yeomanry by G. Fellows.

The "Leasowe Castle" was one of a convoy of six transporters and they were accompanied by a number of destroyers.

The weather was good, the sea was calm and a brilliant moon shone in the night sky.

At 1.30 am on May 27th 1918 when the ship was about 104 miles from Alexandria, the "Leasowe Castle" was struck by a torpedo on the starboard side. The engines were immediately stopped. The troops mustered to their stations, rolls were called, boats lowered and rafts flung overboard. The Japanese destroyer "R" stood by, while the remainder of the convoy continued on their journey at full speed. We are informed that perfect order was maintained on board, the men standing quietly at their stations as if on parade, while those detailed for the work assisted in lowering the boats. Lifeboats were launched in the course of forty five minutes and the rescue attempt continued smoothly. The "Leasowe Castle" remained fairly steady, though sinking a little at the stern, with a slight list to port. All of 'B' (Warwickshire Yeomanry) Company of the Battalion went over the port side and were picked up in the water. About 1.45am. HM sloop "Lily" appeared having turned back from the convoy to assist in the work of rescue. She ran her bows up to the starboard side of the "Leasowe Castle" and made fast, so that troops were able to pass quickly on board. Meanwhile the Japanese destroyer put up a smoke screen for protection. Suddenly about 3.00am a bulkhead in the aft part of the ship gave way, and with a loud noise the "Leasowe Castle" sank rapidly. The "Lily" had a narrow escape, as the hawsers connecting her with the sinking ship were cut with an axe just in time.

Most of the remaining men on board were carried down with the ship and not a single body was picked up. Samuel Spencer was one of these. The battalion held a memorial service on 2nd June 1918.

The Leasowe Castle was originally laid down as the “Vasilissa Sophia” and built by Cammell Laird for the National Steam Navigation Company Ltd., this two-funnelled liner was acquired under the Government’s Liner Requisition Scheme. Under Union Castle management she was launched as the Leasowe Castle on April 5th 1917. On April 20th 1918 while serving as an ambulance transport ship she was torpedoed for the first time by U-35 off Gibraltar but still made port. She was quickly repaired but on the May 27th 1918 was struck again 107 miles north-west of Alexandria and this time sank. This information has been provided by the Merseyside Maritime Museum.

Back to WWI  Back to top Next page 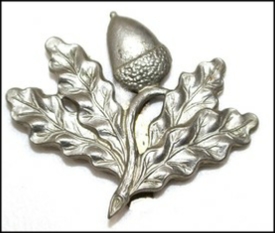