Richard Savidge (Claude’s father) and Emma Hind had married at All Saints church, Nottingham, on 4th October 1884 and their first child was Kenward Arthur born on 27 September 1886 and baptised on 15th November 1886 at St Ann’s; but, unfortunately, he did not reach his first birthday. They were living at 19 Wickens Terrace in Nottingham.

Their second child was Sidney Charles born 15th December 1887. Vernon soon followed on 9 September 1889, and both these children were baptised on 5th November 1889 at St Bartholomew’s church, Nottingham. They had now moved to 24 St Alban’s Street, Nottingham.

The 1891 census records show the family living in St Ann’s parish in Nottingham; but the exact address is not legible. Richard is a wheelwright and Emma a dressmaker. Both are employed.

Sometime in the next three years the family moved to Woodborough and a further child was born. Violet Elsie Louise was baptised at St Swithun’s on 4th November 1894; but her parents were again to be grieving as she also died within a year.

Richard Claude Savidge was born in 1896 and was baptised on 28th June at St Swithun’s church. He is listed as Claude in the 1901 (and 1911) census, maybe to distinguish him from his father Richard. In 1901, Richard, Emma and the three boys were living in The Row, Woodborough. Richard is employed as a joiner and wheelwright and his wife was a dressmaker working on her own account from home.

Ten years later, the family is still living in The Row; but Richard is not there and Emma is listed as a widow. Richard’s death has not been found in the GRO Index of Deaths. Claude is employed as a market gardener, Vernon is a pony driver underground at a colliery and Sidney is a joiner in the building trade. The other information reveals that Emma has given birth to six children of whom three have died. Of these two are known and mentioned above but despite a careful searching the third cannot be definitely identified; but may have been named Ernest born in 1891.

Claude enlisted at Nottingham in the Sherwood Foresters (Nottinghamshire and Derbyshire Regiment) 10th Battalion, soldier number 32379, and became a Lance-Corporal in B Company. He was killed in action on 22nd April 1918. Unfortunately his service records were lost during WW2; but regimental records tell of the circumstances.

In April 1918, approximately a month after the commencement date of the German offensive, his company was chosen to counter-attack the Germans who had entered Aveluy Wood near Thiepval in the Somme department. The Germans had taken possession of the railway line which ran through the wood. The battalion's diary informs us that zero hour was 4.30am and at that time the artillery was to begin a barrage. 'B' Company moved forward at the designated time and advanced down the slopes under cover of the barrage. However, when they were 100 yards away from the railway line, they met with fierce fire from machine guns from the enemy. This caused seventy casualties and forced the Company to withdraw. Most of these seventy men were reported missing presumed killed and their bodies were not recovered until August 1918.

Claude is buried at Aveluy Wood (Lancashire Dump) Cemetery at Mesnil-Martinsart. The cemetery is surrounded by the trees of Aveluy on three sides. It is very quiet but for the sound of birds and the occasional passing road vehicle. On his gravestone are inscribed the words:

“One of the Best. Grant him dear Lord Eternal Rest and Everlasting Love”.

On the tenth anniversary of Claude’s death an In Memoriam notice appeared in the Nottingham Journal of Saturday, 28 April 1928:

The following year another notice in the Nottingham Journal of Monday, 22 April 1929 said:

SAVIDGE – In loving memory of Lance-Corporal Claude Savidge, fell in action, April 22, 1918. Though lost to sight to memory ever dear. – Mother.

Claude’s brother, Sidney, also enlisted in 1916 as a reservist with the Sherwood Foresters and was posted to the 25th Provisional Battalion East Yorks and subsequently to the Durham Light Infantry from which he was transferred to Class W(T) Territorial Force Reserve for employment with The Gedling Colliery Company.

No service records have been found for Vernon Savidge. 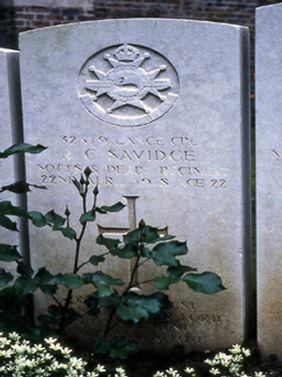 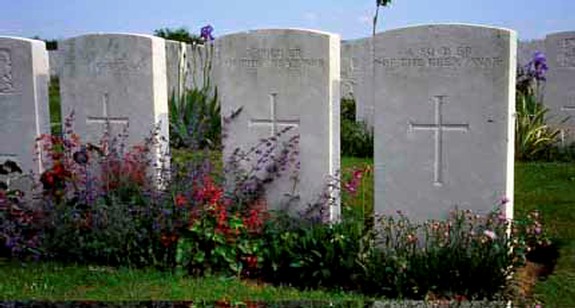 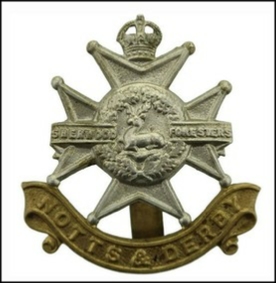