Leonard’s father was John Woodford who was born in Old Dalby, Leicestershire, in 1860. His father, also named John, was a shepherd. His mother came from Willoughby-on-the-Wolds, and the family was living in Langar in 1871.

Ten years later John, now 21, had left home and was employed by Thomas Heath on Hopping Hill Farm as one of three domestic servants. He gave his birthplace as Willoughby. John moved on again and in 1891 was in Epperstone working as a farm servant at Rossellewood Farm owned by Aldred Wilson. It was here that John met Annie Elizabeth Harwood, who was born in 1868 and baptised at Holy Cross, Epperstone, on 8th November 1868. They were married in the second quarter of 1891, at the Derby Registrar’s Office.

Their first child was born in the fourth quarter of 1891 at Newstead and named John George. William Walter followed in 1893 at Linby and then Ernest Edward at Woodborough in 1897. He was baptised at St Swithun’s church on 14th February of that year. A further three children followed, all being born in Lowdham: Leonard Thomas (1898), Alice Emma (1899), and Irene Mary (1901). At the time of Irene’s birth the family were living at Hunters Hill Cottages, Lowdham, and John was employed as a cowman.

The family moved again to Woodborough and a cottage in New Row. The 1911 census shows that John Woodford was now a farm labourer age 49, his wife Annie was 42 and had borne 8 children. John George and William have left home; but Ernest, Leonard, Alice and Irene were in New Row. Ernest was working on a farm and the other three were at school. Leonard was 12 years old and would be 15 at the outbreak of the Great War.

Leonard’s service records have not survived and neither have those of his brothers William and Ernest; but all three have Medal Roll Record Cards. William was in the South Notts Hussars and the Machine Gun Corps. Ernest enlisted into the Notts and Derbyshire regiment and transferred to the North Staffordshire regiment. Leonard joined the Territorial Reserve and then enlisted at Hucknall into the Kings Own Yorkshire Light Infantry, 6th Battalion. The battalion was disbanded in France on 19th February 1918. Leonard was transferred to 2/4 Battalion London Regiment. He was presumed killed in action at Cachy (near Amiens) on 25th April 1918 at the age of 19 years.

The Regiment’s War Diary describes the bitter and intense fighting which occurred during this time and it was at the same time that the world's first tank versus tank battle took place between the villages of Cachy and Viller Bretonneux.

Extract from the War Diary of 2/4 Battalion London Regiment :-

At 6am the enemy attacked in great force but at first was repulsed at great loss. The use of tanks forced our troops to fall back. Tanks worked around the rear of our position and a further withdrawal became necessary. The battalion fell back just east of Cachy.

on the Pozières Memorial

Leonard’s youngest sister, Irene Mary, married Charles Oldham in 1929 and went to live in Dale Avenue, Carlton, where she looked after her mother Annie Elizabeth in her later years. 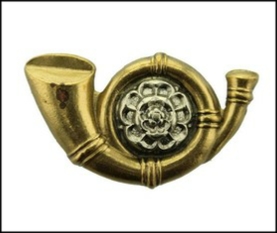 Top: Cap badge for the (Kings Own Yorkshire Light Infantry or KOYLI)