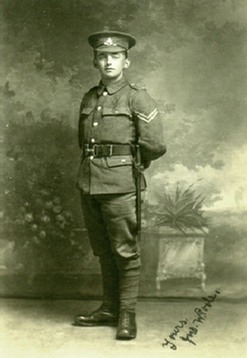 John William Poole was born on 21st February 1898 at Langford Hall, Newark-on-Trent where his father, John Patching Poole, worked as farm manager for the Seely family. The family later moved to Woodborough and first lived at Bank Farm and eventually Park Farm.

John joined the 2/8th Battalion of the Sherwood Foresters (Nott’s and Derby’s Regiment). There appears to be a lot of confusion about what happened to John.

In April 1917 the Germans had a stronghold at a place called Le Verguier and the battalion had received orders to attack it. There were many casualties and after the Germans had evacuated their position, many dead had to be buried. Even while the dead were being buried they came under fire from heavy shelling and the burials were completed in great haste.

Although John’s grave may be found at Prémont British Cemetery, his body is not there, as the gravestone states “Buried near this spot” An entry under the “In Memoriam” column of the Evening Post, dated 7th April 1920 infers that John was taken as a prisoner of war. We shall never know what really happened to him.

Back to WWI Next page