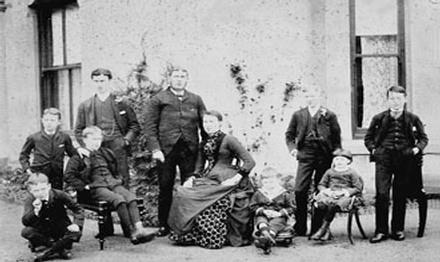 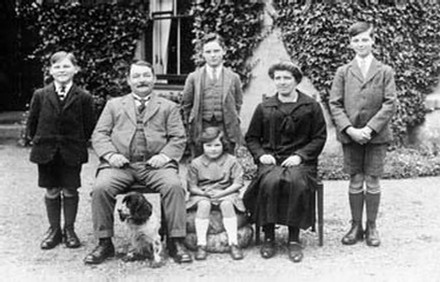 Two of many notable families who have occupied The Manor House, the Howett and Foster families, 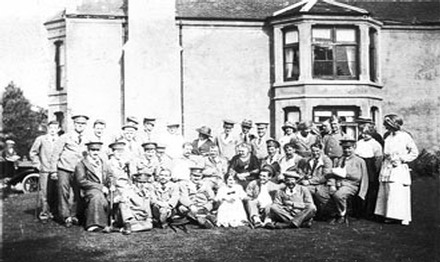 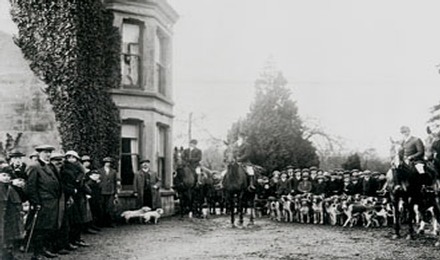 Two interesting photographs, on the left dated 1915, a group of injured soldiers from the first world war when the Manor was possibly being used as a recuperation home. Could some of the none uniformed people be members of the Burnett family? On the right, Mrs Joyce & Mr John Taylor with Rastus in 1956, at that time they were the current owners of the Manor House. 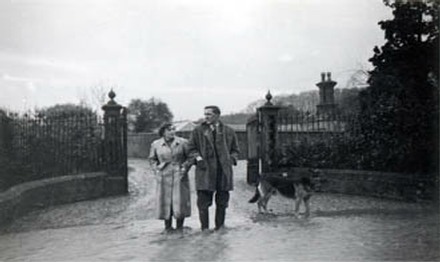 Left, the Manor and Manor Farm in 1955. The large buildings in the background were the former racing stables.

On the right, Mr & Mrs John Taylor with Rastus outside the gateway to the Manor in 1956 , they lived there for nearly 20 years. 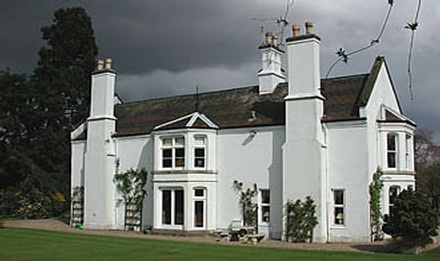 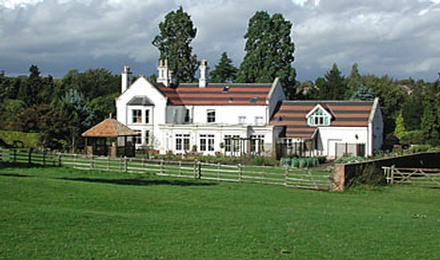 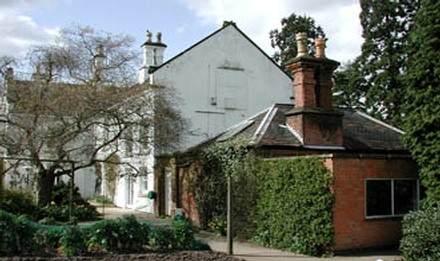 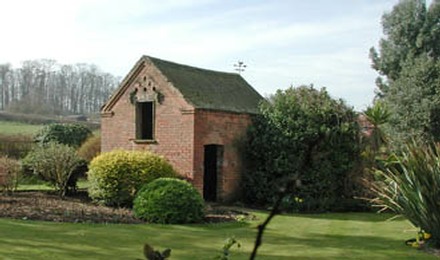 Four recent photographs show the distinctive stripped roofing tiles which also feature on the roof of the nearby racing stables. Bottom left the attached coach house which has since been redeveloped and bottom right, the former bakery to the Manor, but in a neighbouring garden, was demolished in 2003.

This small extract from the 1888 O.S. map shows the relative positions of The Manor House (also known as Middle Manor and much earlier as Hertford Manor) to Woodborough Hall and also that to Nether Hall. The spelling of Howitt on this map and Howitt elsewhere on this website is incorrect; it should be Robert Howett. This has been authenticated by examination of his birth certificate.

Summary of ownership and alterations with key dates 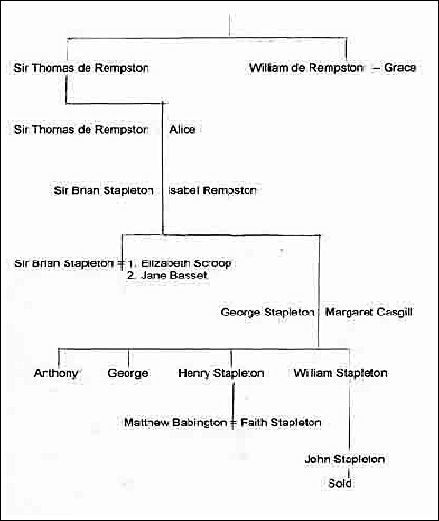 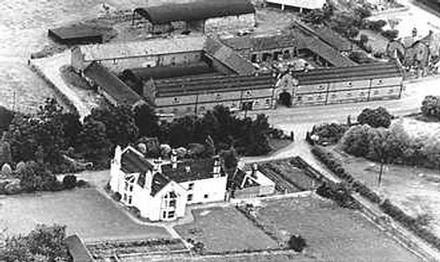 Early History: The present Manor is described as a fine period country house set in a private position, originally part of a substantial agricultural estate. It has a wide railed frontage to Main Street with twin carriage drives, sheltered by mature trees and bushes but with extensive open aspect to the rear. Large modern houses have been built on each side in what were the former grounds.

Woodborough Manor is believed to occupy the site of one of Woodborough's three original manors which were listed in the Domesday record. Woodborough Hall, in recent times a nursing home, now a restaurant [2004-onwards], Woodborough Manor (or Hertford Manor) which is also associated with the Manor Farm buildings opposite (converted into private dwellings known as Taylor's Croft in 1992/3) and Nether Hall (or Manor), also known as Old Manor Farm, which was a farmhouse until demolished in 1965 to make way for a development of new houses in what is now known as Old Manor Close.

Following the Norman Conquest, the three Saxon thanes Ulchel, Aldene and Aluric who were the original 'manor' owners lost their lands. Ralph de Limesin founded the priory of Hertford, a cell of St Albans Abbey, giving it the tithes from his lands in Epperstone and Woodborough, hence the naming of the Manor House in Woodborough as 'Hertford Manor'. William de Rempstone acquired the Middle Manor by 1400. The Nether Hall was Church (York and later Southwell) property and the Prebend of Woodborough was entitled to the proceeds from it.

Early records show that Simon de Cruce held a manor in Woodborough in 1309 and the family probably owned the Middle Manor, as we are aware of the owners of the other two manors at that time. Thoroton says there is a manor in Woodborough called Rempston's Manor, settled on William de Rempston and Agnes his wife for life in 1399. William was a close relative of Thomas de Rempston who later became Constable of the Tower of London and his son married Alice Beckering. They had three daughters, Elizabeth, Margaret and Isabel.

At some time during this period Middle Manor appears to have been transferred to the direct line of descent in the Rempston family, perhaps William and Agnes had no children. All three daughters married, Isabel marrying Sir Brian Stapleton of Yorkshire. By the time her father died in 1459 Isabel was heir to the Rempston estates. The line of descent passed through Isabel's son, also Brian, to his son George Stapleton who had land in several villages including Woodborough at the time of his death in 1564. This is the first connection of the Rempston/Stapleton families with Woodborough since William and Agnes in 1399/1400. George Stapleton had four sons Henry, Anthony, George and William, but only two of them, Henry and William concern this story.

Amongst early Woodborough wills is one for George Clarke who died in October 1578. George was a wealthy farmer who probably lived at the Middle Manor at this time. Amongst other things in his will he left 6/8d to the 'poor money box' and 3/4d to the clerk (vicar) Peter Jackson after whom Jackson's Close, now Pinfold Close, was probably named. In his Will, George also says 'l give unto my landlord, Mr Henry Stapleton Esquire, and to my landlady his wife and to Miss Faith Stapleton his daughter, any one of them ten shillings’. One of the witnesses to the Will was the aforementioned Peter Jackson, clerk, and another was a William Lee.

Henry Stapleton died in December 1586, leaving all his lands to his daughter Faith, who married Matthew Babington but died childless in June 1589. After her marriage Faith and Matthew probably occupied Woodborough Middle Manor. After Faith's death the former Rempstone estates went via Henry's brother, William, to William's son John who then sold the Middle Manor to John Field, a fishmonger and citizen of London. He paid £300 for it on 24th November 1596. Thus the Manor, after 196 years, passed out of the Rempston/Stapleton family.

John Field later sold the Manor for £600 to James Askew who also appears to have purchased the Manor just as an investment. He sold it to John Wood of Lambley on 13th May 1607 for £870. In the sale document between John Field and James Askew is a list of tenants in the estate, at the head of which is Matthew Babington who was Faith’s husband.

Robert Howett died on the 1st January 1889 aged 45. It would seem that on Howett's death, the mortgage was foreclosed by a Mr Mills of Alvaston, who left it on his death to his nephew Mr William Bradshaw who was still in possession of it in 1896. Mr Bradshaw let the property in 1900 to Mr Arthur Burnett who died in February 1904 and in a 1908 Directory Mrs Burnett is listed as having a stud farm. Mr Charles Hose Hill, who had purchased the Upper Hall and Hall Farm with other properties in 1895, and following the death of Mr Mansfield Parkyns, Mr Hill also purchased the Middle Manor in 1915.

When Mr Hill left the village in 1922 both estates, the Upper Hall and Middle Manor, and all the various properties in the village belonging to them were sold, a good many of them to sitting tenants. Mr Charles Ernest Foster, who had moved from what is now the Old Post Office, to become Mr Hill's tenant at the Middle Manor in 1916, purchased the Manor in the sale for £8,250. At the time of the sale the farm consisted of 112 acres of grass and 68 acres of arable land. At the start of the Second World War in December 1939 until March 1940, soldiers of the Wiltshire Yeomanry were billeted in the stables as well as in many other buildings in Woodborough.

The current owners of the Manor House, Douglas and Helen Ashby have also made changes, in 2001 the garage and wash house block were demolished to enable an enlarged garage to be built with rooms above. The Manor House currently enjoys 1.6 acres of mature gardens with a variety of specimen trees, there is a walled kitchen garden producing both vegetables and soft fruit.